The day started off like any normal quasi-adventure, get into the car, and go in a direction towards a location that the driver seems to know, and I have never heard of before.  Of course, this meant I settled into the back seat of the car and proceeded to zone out and watch the Thai landscapes move past.  Now, I should have know that I needed my camera ready, as you never know what to expect in Thailand.  Near my house there are a few places that have near life-size dinosaur statues.  Yes, because it is Thailand.  You don't ask why, you just accept the quirks.

So, while sitting there in the back seat of the car, watching the landscape go by, I notice two fighter jets.  Just parked in a car lot.  Then three small private planes.  Why? Why not.  It is Thailand, so I think you just accept that these things are normal and move on.  I am pretty sure I could have purchased those jets for a nice price.  I have no clue if they were working, but they sure looked like Vietnam or Korea era US military jets.

So after this, I really should have been prepared for the rest of the day.  Sadly, I was ready to take pictures in all the wrong places.  Oh well, these things happen.

The first stop we made was to an awesome little floating market to get some amazingly delicious seafood.  I first want to go on record and state that I really detest most seafood.  Most of the time it tastes briny and old.  This was amazing.  I am not sure if it is was the overuse of garlic and butter, or the fact that it was probably swimming somewhere in the Gulf of Thailand earlier that day, but damn.  Amazing. 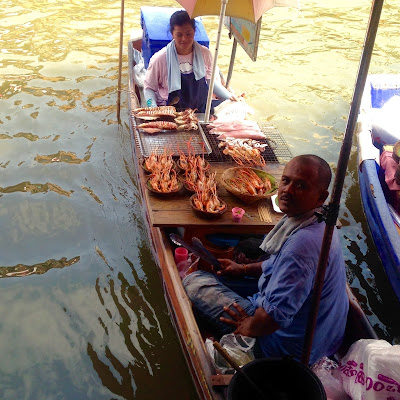 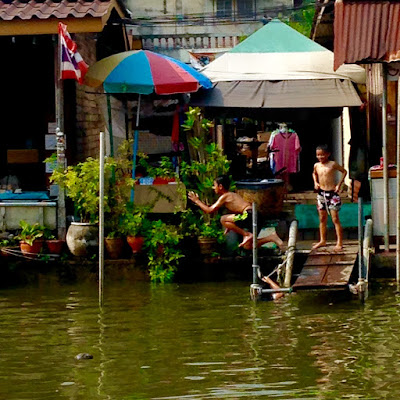 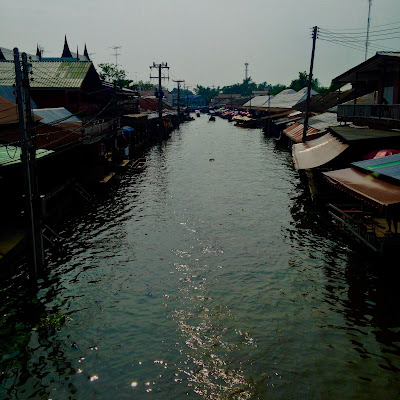 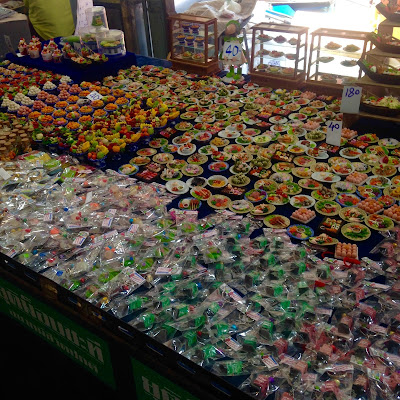 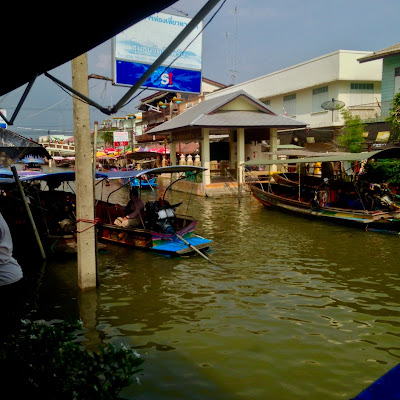 After our lunch stop here and our time to stop and people-watch for a bit, we headed over towards a local temple (where I learned that there are places where foreigners cannot use their cameras but the locals that are around you can...)

So, we went to a beautiful temple where the custom is to place bits of gold leaf on the various statues in the main sanctuary.  Luckily I was with my friend who was able to walk me through the protocol.  After doing all the proper motions, I got to the point where I was placing the gold onto the various statues and suddenly the line stops.  The lady in front of me pulls out her iPad and starts taking pictures of everything.  I think to myself, I guess this is OK as the guard is staring right at us.  So, after placing the gold, and noticing just how much gold was on the various statues (my finger was able to indent about a quarter inch into the soft metal), I take a photo with my phone.  Boom!  The guard is not happy

He yells something to me, while I am standing at the top of the area.  Beckoning me to come down... now.  I make my way down and he pantomimes "no camera".  I am very confused as there are literally many people around me at this point doing the exact same thing as I just did.  As he points to the gold area, there are a few people taking photos in almost the exact same spot I did. Well, guess I am in trouble for being foreign.  I apologize and he tells me to delete that particular photo, which I did in front of him. I walked away with my friend very confused.

As I took the following photos and was not asked to delete them, just the one that the guard pointed out, I am going to assume they are acceptable.  I want to point out what a beautiful creation this shrine really is.  There are many shrines with various figures on them all around Thailand, but this one has to be the most inspiring one that I have seen so far.

I think the best way to describe it would be to compare it to the feet of the worn down statue of St. Peter in St. Peter's Basilica in the Vatican.  The statue itself is beautiful, but it is moving because of the human impact that time has had on it.  This statue had so many people press gold to it over the years that it took on a whole new form.  The entire statue was bumpy and uneven, but in a very beautiful and reverent way. 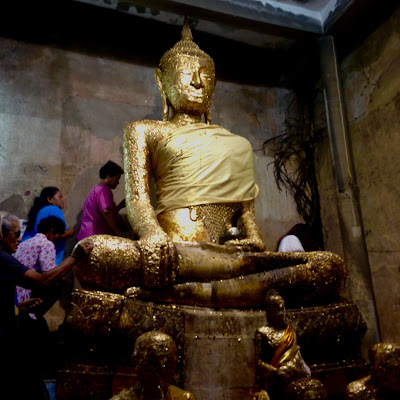 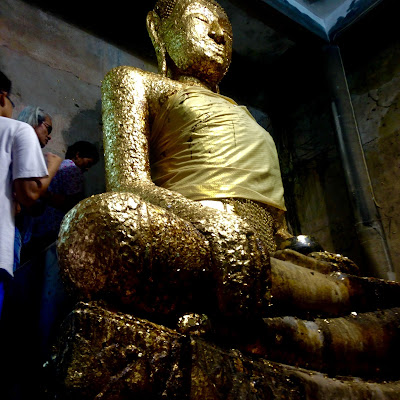 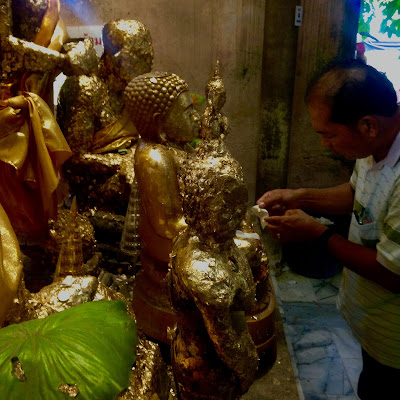 So, after being politely from my photography quest, I decided to take some pictures outside the guards domain.  Again, I was quite wary, but maybe it was just one guard who was having a bad day.  After taking some pictures around the temple, I am going to guess that was more the case. 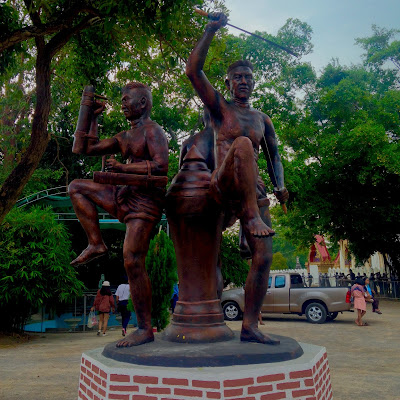 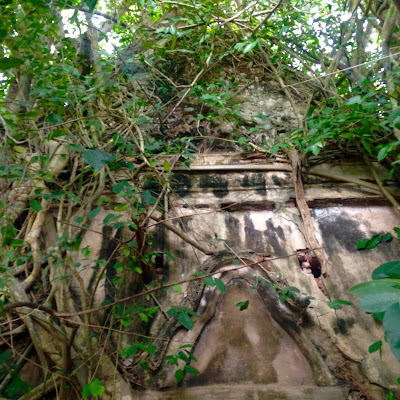 So, without any more run-ins with the guard, and seeing busses of tourists taking photos, we made our way to the final destination of the day - the family house and land of one of the people on the trip.

It was worth the two hours of driving each way.  If it were not for the very angry dog and my ever-present fear of lethal vipers that like to sit in trees, (which I did not see, but I just knew were watching my every move), I could have stayed there for days.

It was so peaceful and quiet.  I am now very used to the ever present sounds of the suburbs of Bangkok, and the quiet in the air was almost palpable. 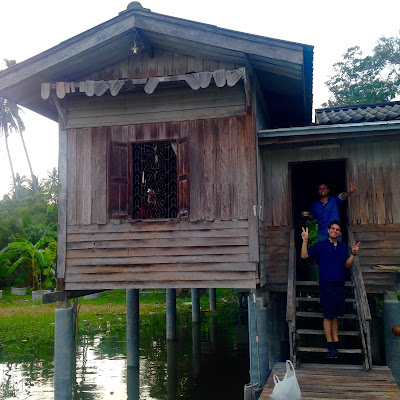 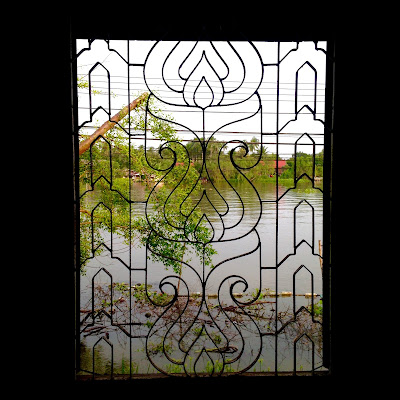 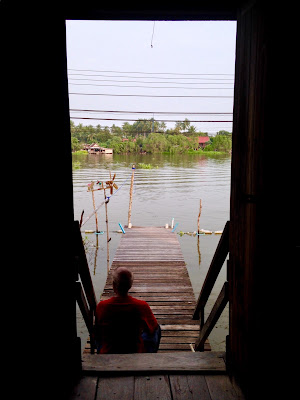 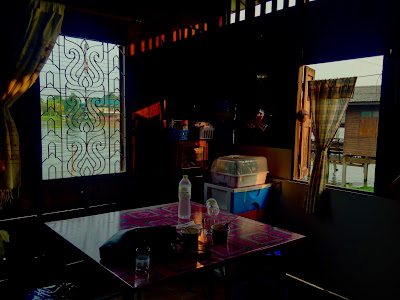 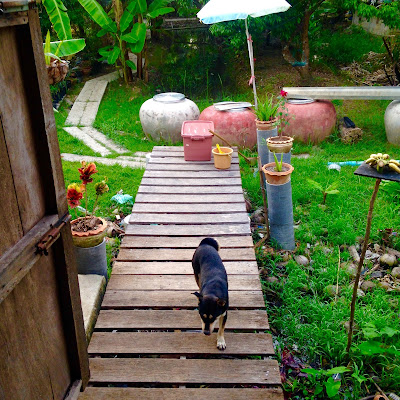 The last picture is of the dog that I am pretty sure wants to murder us all in our sleep.  Or when we are awake.  He looks cute, but inside is a little ticking time-bomb of a murder machine.  Yeah, I am onto you Kujo.

After a visit that should have lasted hours, but went by way too quickly, we went and did some gardening on the neighboring plot of land.  Well, by "we" I mean Eddie and I supervised.  We did a great job supervising though.

It was hot and I think we were tired.  We did try to take great pictures though, that has to count for something, right? 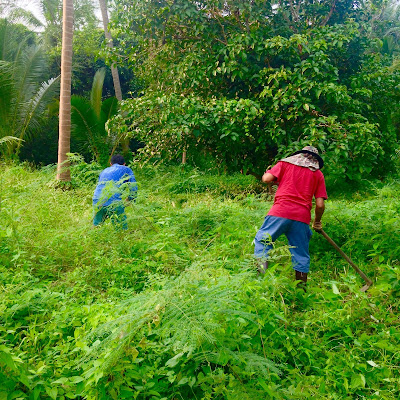 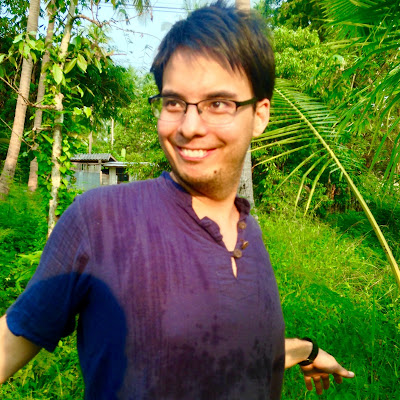 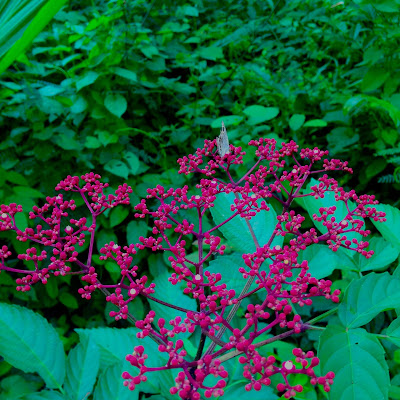 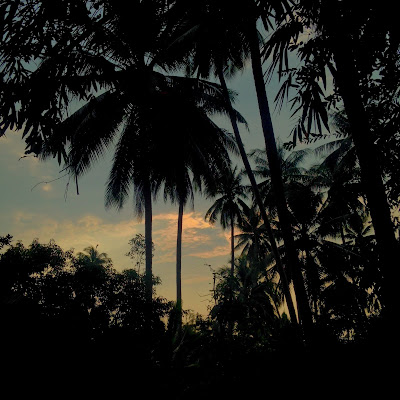 At one point, Eddie even held a tool.  This was far beyond my energy level though, so I guess I can say that he was more of a foreman and I was a supervisor. 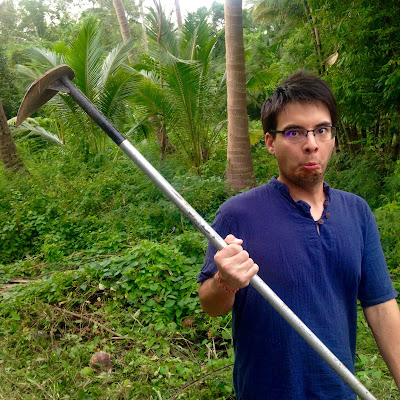 All-in-all, a very beautiful day spent with some amazing people.

So, here I am, "working" by the side of the road, and I look up and see a man riding on a scooter.  Now this is nothing out of the ordinary, but this man happens to have a 50 pound dog on his lap with his paws on the front handle bars and another 50 pound dog sitting in the foot area below him.

I have seen families of five riding on one scooter before in Thailand.  No joke, Mom, Dad, and three kids on one Vespa, but a man and two dogs just floored me.  It was like something out of those paintings where the dogs play cards.  If the dog had been smoking a cigar or had given me a smile and a wave I would have questioned my sanity.

Well, questioned it more than I already do.  Apparently dogs drive Vespa scooters in Thailand.

I am also quite impressed with the dogs ability to stay in a straight line and use the gas and brake with no thumbs.

Just put that on the list of things I learned today.

Also, don't use a camera if you look foreign.  If you look Thai, go right on ahead.

In case you were keeping track on the score-card, this is about where everything took place.  Honestly, I have no clue where it is, but I happened to ping things with google maps.  Good luck finding it all again. 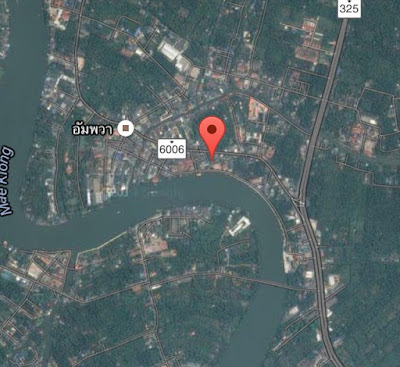 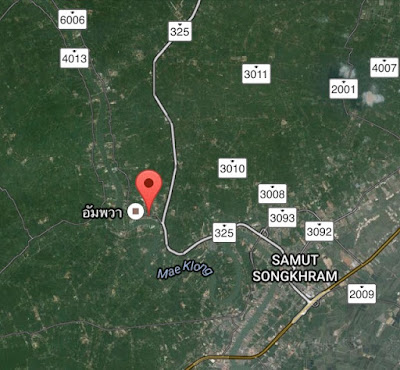 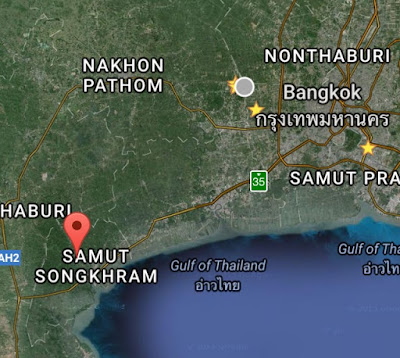 Now, I don't want to enforce any stereotype, as that is the first time I have seen an elephant while in Thailand, but yes, I guess some people do really ride elephants to work.

Just chalk another day up to "Forget about it Rico, it's Thailand."

*Note: I did a bit of research before posting this blog and found that there is nothing against respectful images of Buddha.  As I feel that these are respectful images done in a respectful tone, I think they are OK for this blog.  If anyone feels otherwise, please do not hesitate of contact me and ask me to remove them and I will do so quickly and without argument.
Posted by test at 11:43 PM