Scaling a Mountain in Osaka

At a whopping 4.53 meters, Mount Tenpo looms majestically over the surrounding...park (the flood gates are a bit taller).  Your three to four minute ascent is marked with a straight path, some pretty trees, and the surprise at the end when you reach a tiled area with a sign and a cute looking anthropomorphic mountain picture.  Many people climb Mount Fuji in their quest to take on the peaks of Japan, but only the chosen few will reach the top of Mount Tenpo.

Our trip to Osaka was more of an aside to the rest of the main journey.  My wife had a childhood pen-pal that came out to our wedding the year prior, and we decided that we should see Osaka with her friends while we were on our way through Japan.  Needless to say, Osaka was amazing.  The food, the culture, and of course, Spa World.  Spa World will have to be another story for another time.  Not sure if I am ready to discuss what happened there yet with the greater world.

Our day started in Osaka with a visit to the Osaka Aquarium.  This place is freakin' awesome!  I mean, look at the signs out front!  Alpacas! 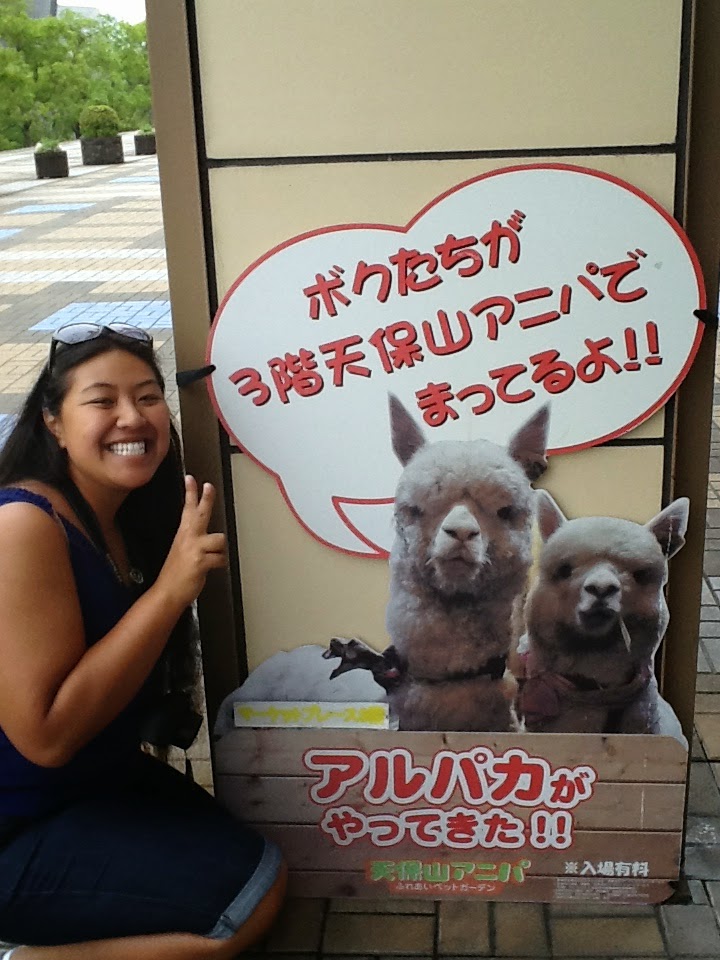 Probably nothing to do with the aquarium

Needless to say, we had to go inside.  It was great, fish, fake snow machines, a huge sun fish, penguins, and this guy who stole my heart with his fantastic dance moves. 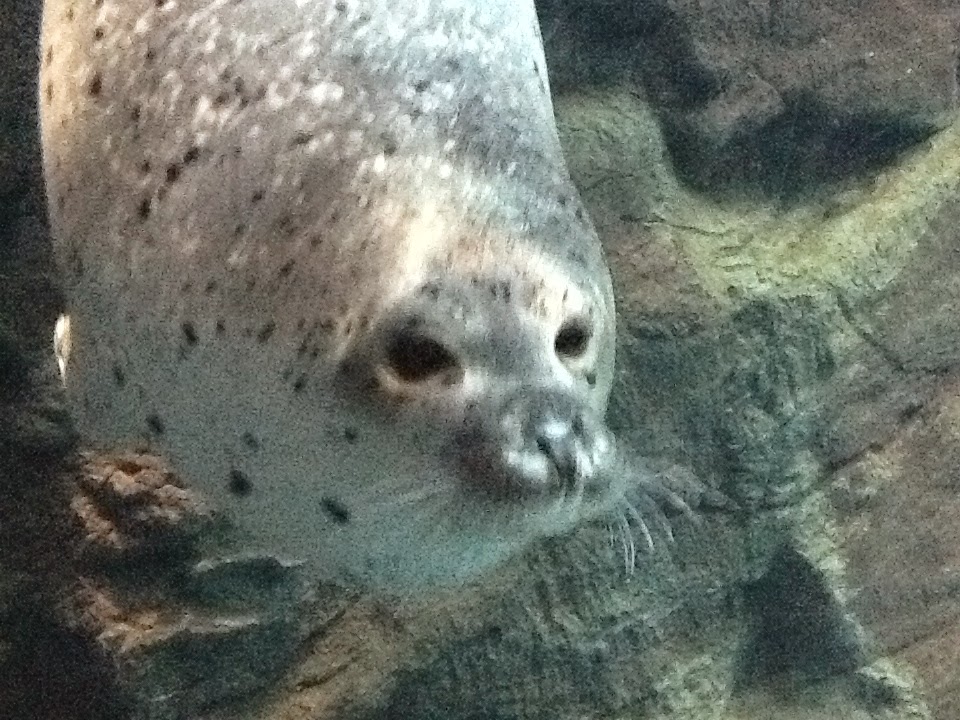 Dancing with the seals?

I went left, he went left.  I went right, he went right.  We spun and we hopped (sorta).  It was a ballet that could have only been better if it were caught on camera, which it was, but again, as with Spa World, will not be shown on here for the sake of everyone reading.  For a few minutes we transcended the few inches of plexi-glass that separated our physical forms.  Humans and spotty-speckled seal creatures with cute faces were one.

After the Aquarium we were off to summit my mountain.  I did not know it was a mountain, but just that there was a geocache on it. Using the same decision making process that helps me each time I decide what to see in a new city, I walked over to Mount Tenpo to look through the bushes for a hidden box full of happy meal toys.

4.53 meters may not seem like a lot to the average person, but if you were to try and jump and touch that, you would fail miserably.  See my logic there?  Now, as this is almost 15 feet, we knew we had to be prepared, and we set out at a brisk pace and... promptly made it to the top.

There was a quick stop in the middle of the "hike" so that my wife could look at a bug she found on a tree.  I have mentioned before that she likes taking photos in macro of different things, and this was a rare opportunity to do so in such a precarious location as on the side of a mountain.  Achievement! 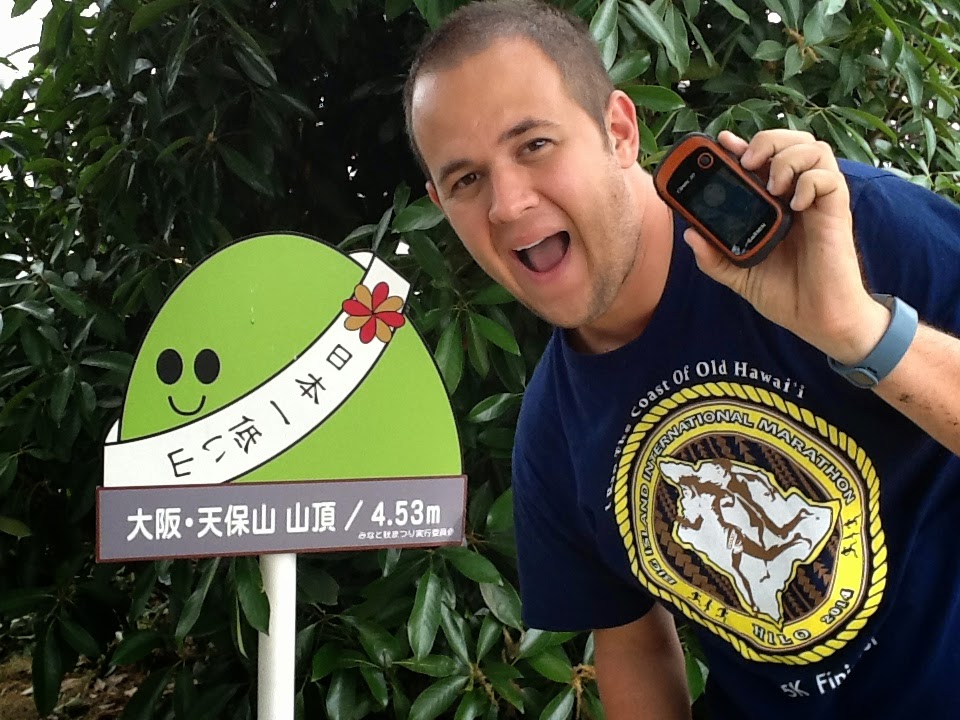 Also, unbeknownst to our ascent team, scaling Mount Tenpo entitles you to an official certificate of achievement.  As I have no other certificates of achievement, this will have to do for now. 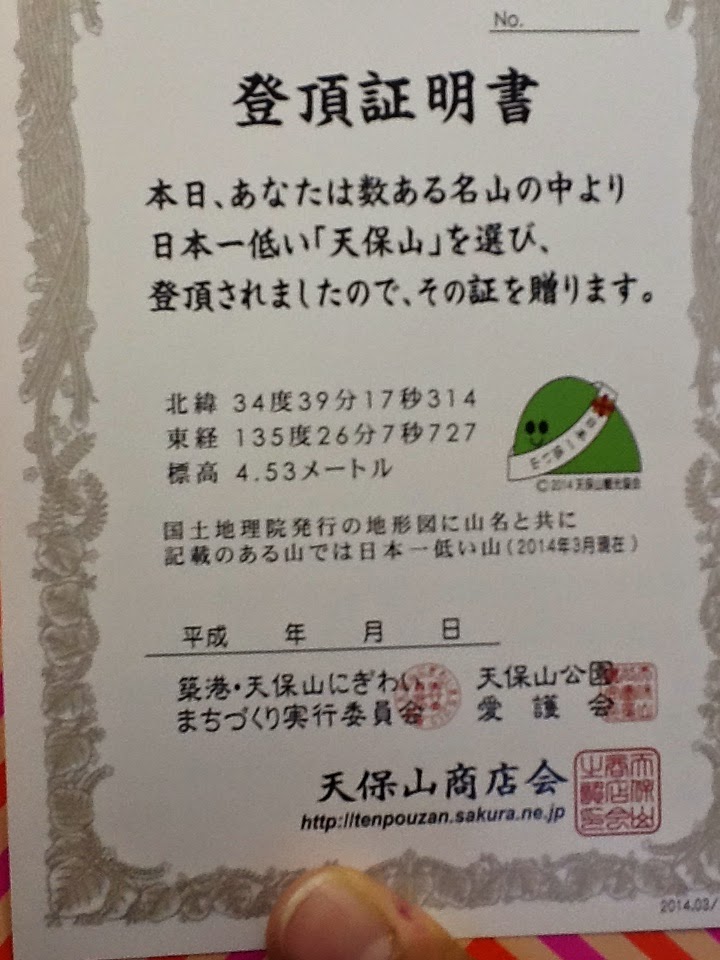 As our climb was done, we had to go and see another Osaka landmark - Osaka Castle.

This place is huge.  Like, you stand there and go, no way, that is way too big.  Just trust me on it.  Here is a picture of a rock in a wall with my wife next to it for scale. 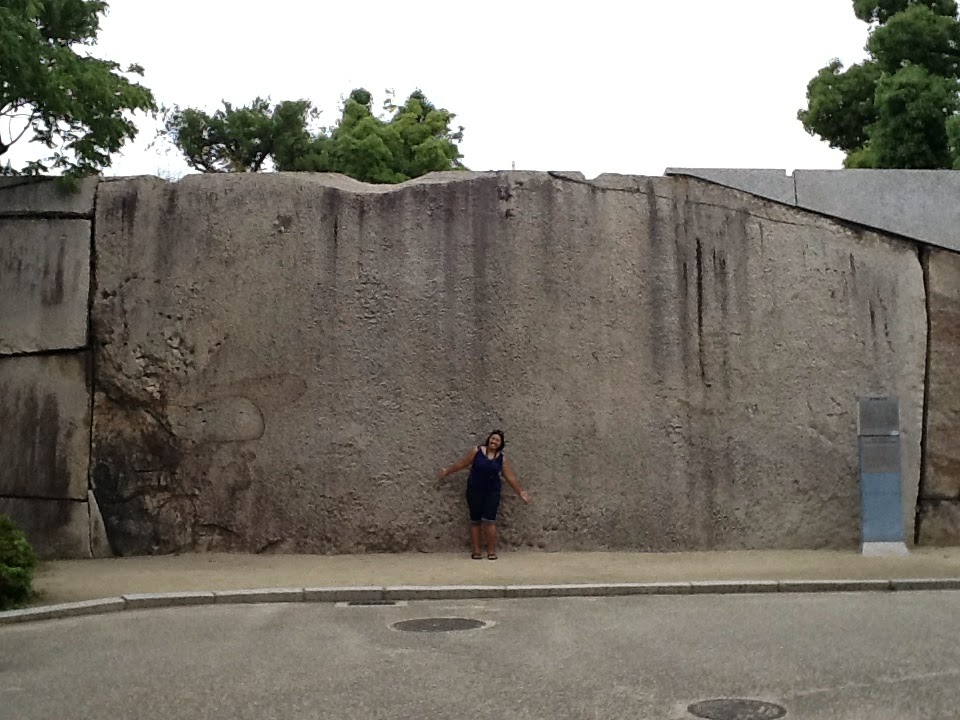 I am sure that there are all sorts of historical facts that you could read at this point about Osaka Castle, but let's just suffice to say that it is big, there are a ton of rocks, and you would have to be a next-level idiot to attack it. 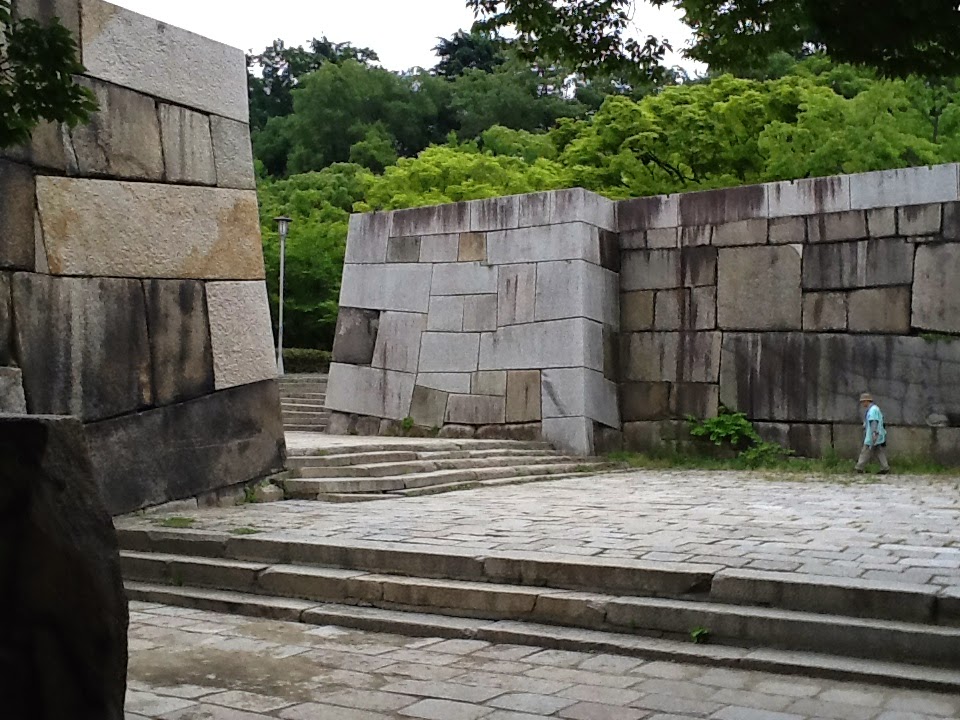 Person in the Picture is Actually a Giant 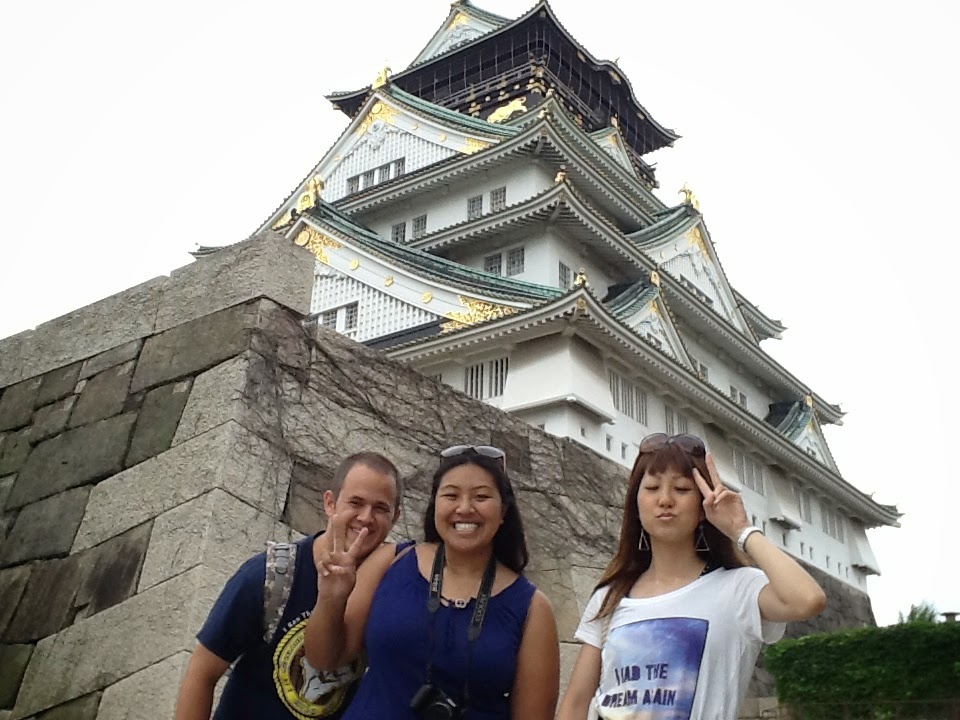 Picture Shot from Below to Make us Look Cooler

No trip to Osaka is complete unless you have seen some nightlife.  Food, lights, and a few stories that should not be told took place after this picture, but let's leave those for another time. 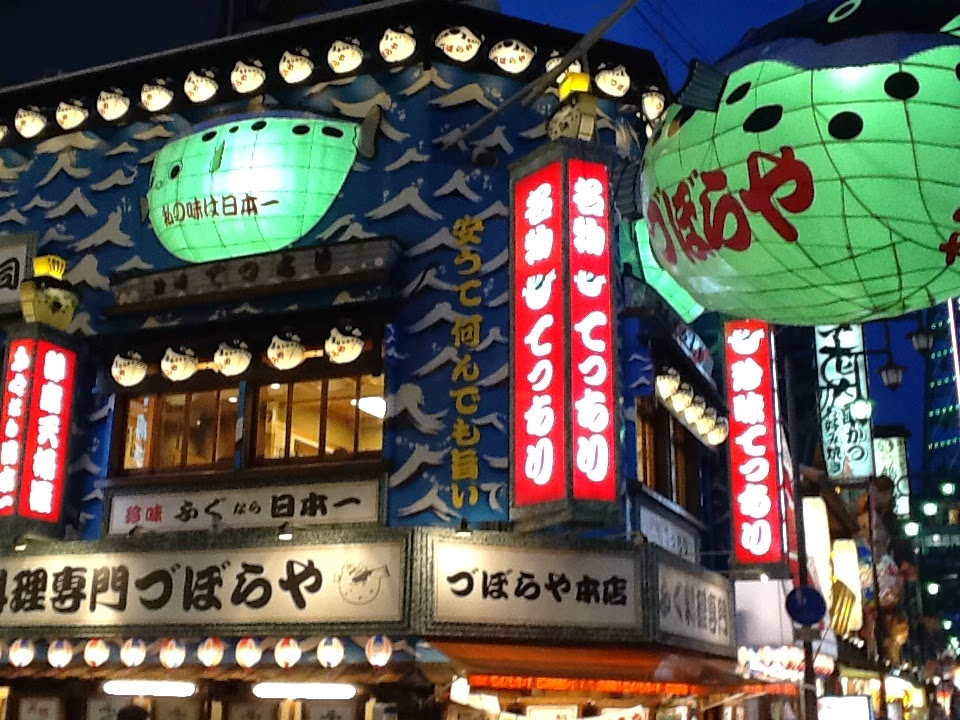 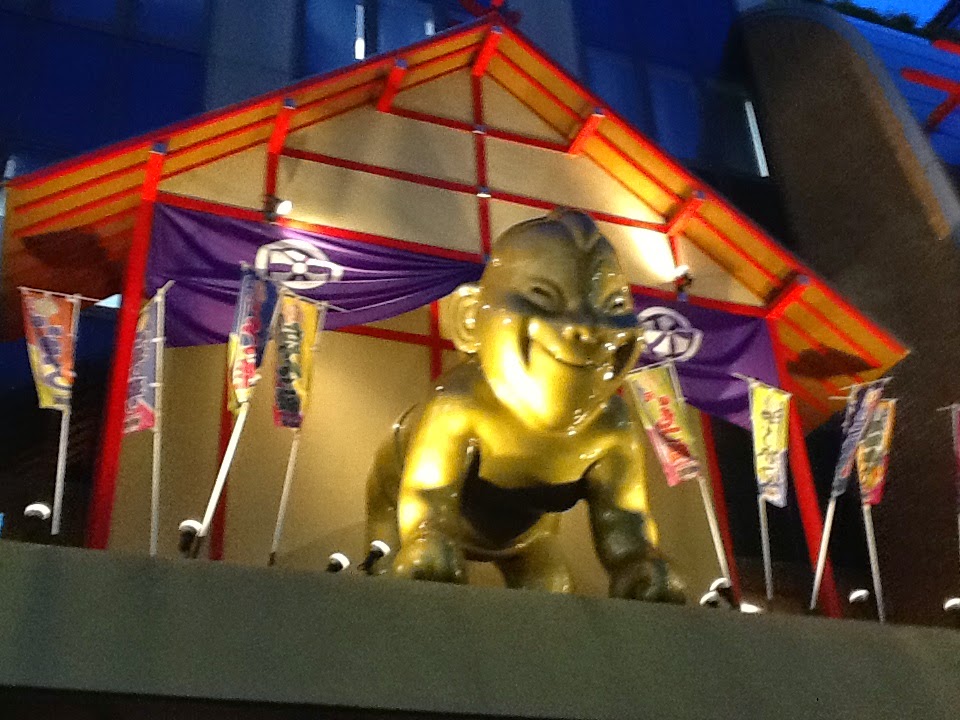