No Touching the Trevi Fountain

The Trevi Fountain is a picturesque masterpiece located just minutes of walking distance from Barberini Station in Rome.  The fountain has appeared in quite a few movies and is featured in just about every single tour book known to mankind that covers anything remotely Roman.  Honestly, if you are in Rome, you better see this location, as you will never live it down if someone finds out that you missed it. 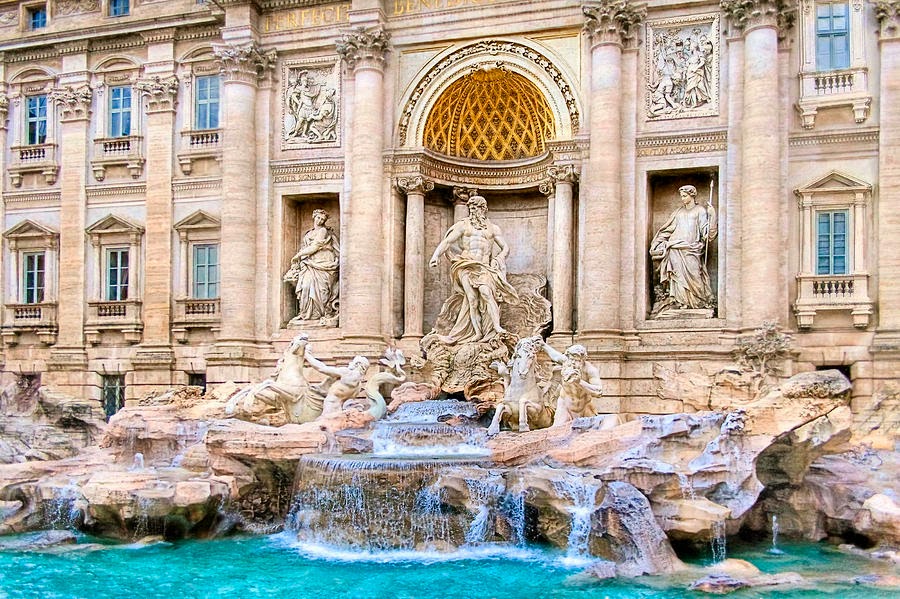 One of the best things about this area in my opinion is the streets.  In my most uneducated opinion, the streets in this quarter feel older and more lively.  Even thought there are almost a million options on how to move around this area, I would highly suggest taking the time to wander from Barberini Station and enjoy taking in the old shops.  You will pass leather shops, gelato parlors, delicious coffee-houses, and all the sounds and smells that go with them.  The streets are narrow, the cobble-stones are a patchwork of two-by-two inch squares that have been tessellated together since before time began.  While a trip to the Trevi is an amazing highlight to this section of Rome, you should never underestimate the beauty of the surrounding area when you travel. 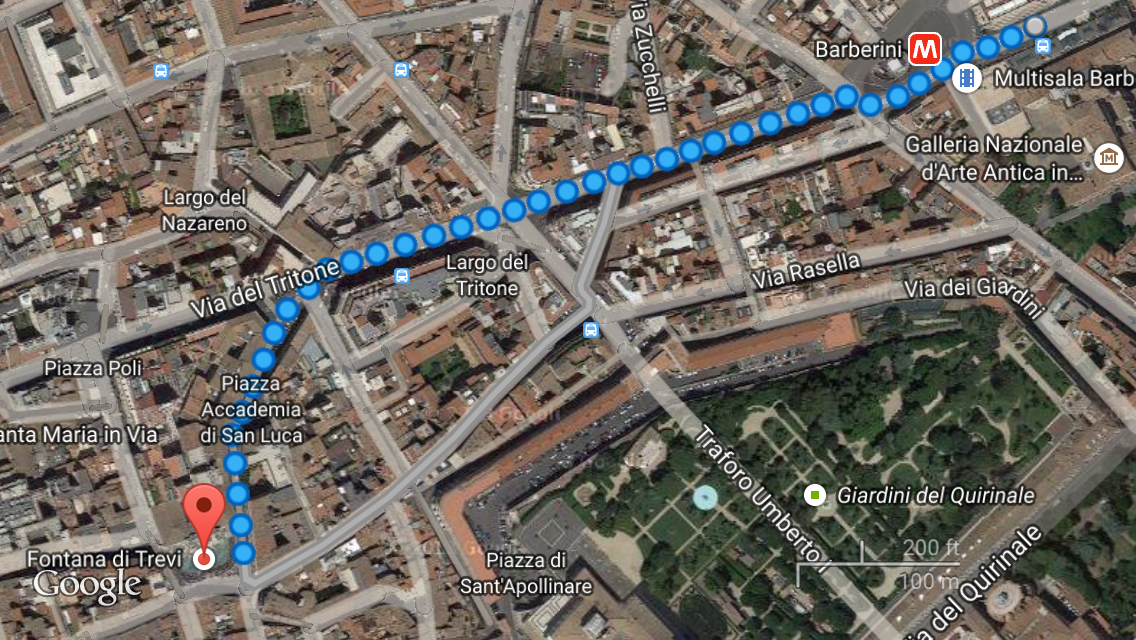 After arriving at the Trevi, you quickly realize a few things.  The first is that any picture of the Trevi Fountain was taken on an extremely nice day, and that they must have cordoned off the tourists.  That shit is crowded! 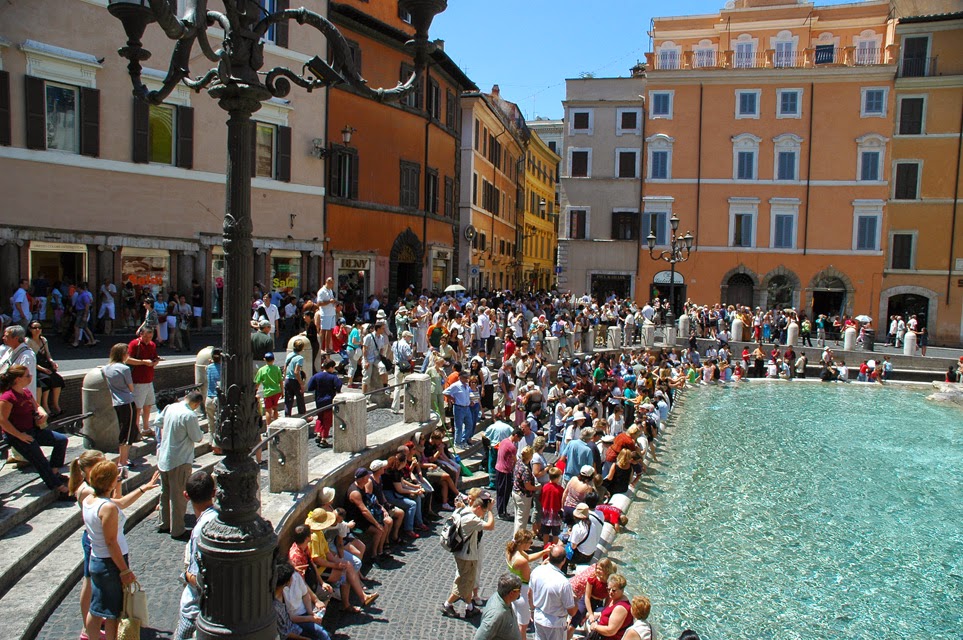 After a few minutes, you just have to decide to leave the manners at home and shove your way to the front in typical tourist fashion.  When a person travels thousands of miles to toss a coin in a fountain, no freakin' tourist is going to stand in your way.  I am only glad that I ventured to the Trevi Fountain before selfies came into vogue, I cannot even imagine how much worse it must be now.

After shoving your way to the front, you make a harsh realization - any picture that you have seen was taken by a crane and a wide angle lens. 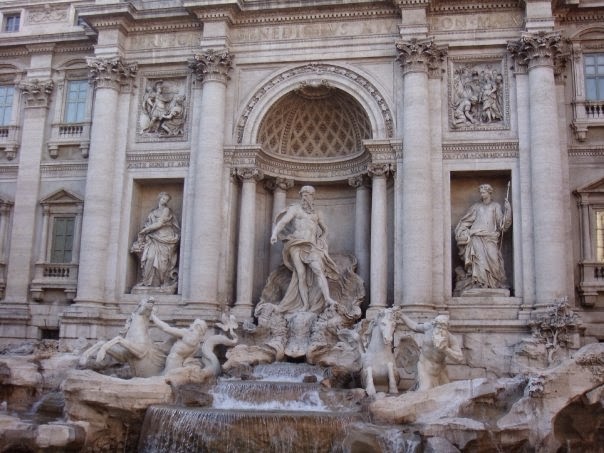 Besides the obviously amazing view of some extremely naked people made out of marble playing with some sea-creatures and horses and shit, the thing that really stuck out to me are the signs that are located around the fountain.  Touching the water is a crime.  You will get fined close to a gajillion euros and probably be publicly ridiculed or something else as deemed appropriate by the police officer.

I wanted to touch the water.  If there is one thing that I cannot handle, it is being told not to do something that silly.  You can throw coins into the fountain but you cannot touch the water?  Obviously it is not a bacteria worry.  I highly doubt you are going to contaminate the water supply of Rome by touching the fountain...

I was going to respect the wishes of the all-knowing sign.  I mean, when in Rome, right?  Then I noticed these assholes... 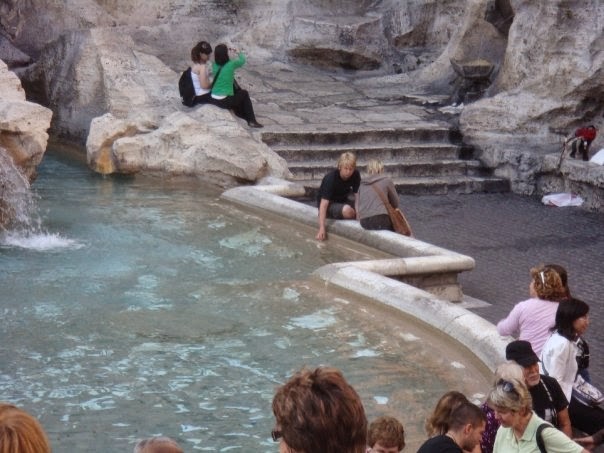 Yeah, I touched the water.  I am such a rebel.  I would have been able to resist had it not been for that person in black.  Seriously.  What the hell were they thinking?  Violating the sign?  Causing others to do the same thing?  If this case were to go before a judge, it would have been thrown out solely because that asshole made me do it.  I am who I am, and I could have done nothing else.