A good friend of mine and I decided to have a bit of an impromptu trip into Bangkok today to find a few geocaches.  Of course, sometimes our goals and dreams are not realized, but today we surged past our idea of finding a "few" and ended up walking about 11 miles while searching high and low for geocaches around the city.  As we both have recently gotten new fitbits, we thought it might be fun to have a bit of a step goal.  We were able to reach that goal just a little too fast, so we upped the ante, perhaps just a bit too much.

I am sore and sunburned, but all-in-all, a very good day.

The whole thing started out with our wanting to walk out on a few of the bridges over the river in Bangkok.  I must admit that the bridges are usually quite beautiful, and standing over the water offers a bit of a reprieve from the oppressive stagnant heat of the city.

The view is stunning.  Absolutely stunning. 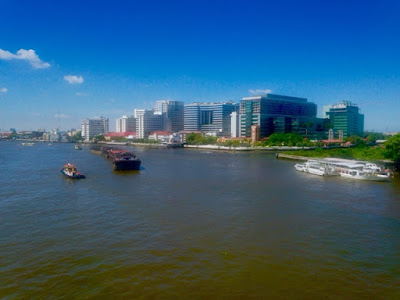 Plus, there is always a bit of an added bonus when you get to interact with some unexpected wildlife.  I was walking back after a rather unsuccessful search for the geocache with Eddie, and saw this: 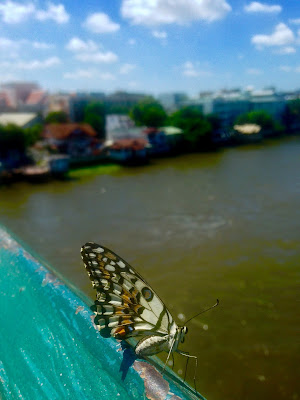 I decided to slowly carry him back to the shoreline and place him on a gardenia.  Needless to say, I am pretty sure that I have found a new best friend.

After a bit of meandering, we came across this amazingly beautiful carved lion.  Apparently this was left here as a marker, after serving a tour of duty as a ballast stone for a ship.  Quite a cool and random find while on our geocache trail. 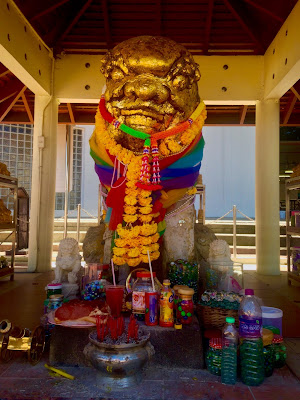 Yes, that is a huge cut of meat in the lower left corner of the shot.

We eventually found our way onto an amazing piece of architecture known as Rama VIII bridge.  There is something about the fact that it is not the typical bridge, but has a very asymmetrical design that makes it both eye-catching and very appealing.  We found the geocache in the middle of the bridge, and then continued on with our journey. 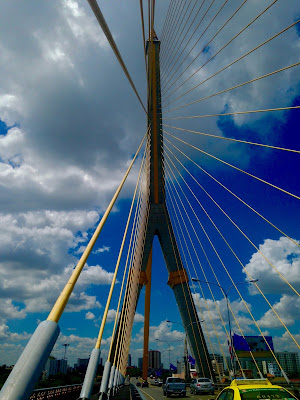 Now, if you notice, one of the key colors of the bridge is yellow-gold, with the other being grey.  With the bridge being a rather key landmark, there is of course some military security.  I am aware that camouflage is not always the easiest thing to create and maintain, but this is one of the points where I wonder if they are even trying... 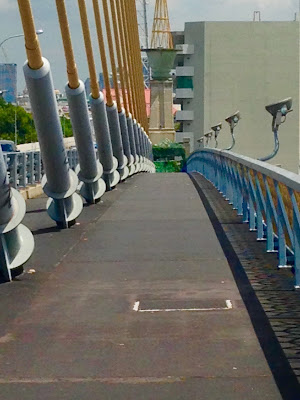 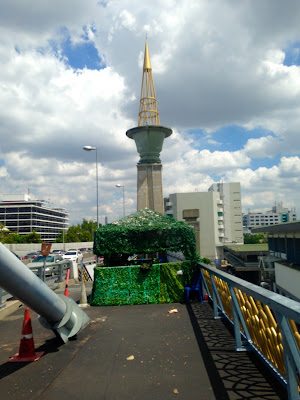 Yeah, they blend in really well.  I love the olive-drab camouflage netting mixed in with the ultra-urban look of the bridge and skyline.

We then decided to ditch the bridge scene and work our way up one of the canal/rivers that divide Bangkok into many smaller flood-zones and drainage areas.

We made our way to the cache that is actually located in this picture, (although I did not notice it at the time, because I was thoroughly enthralled by the massive fish that I will mention again soon). 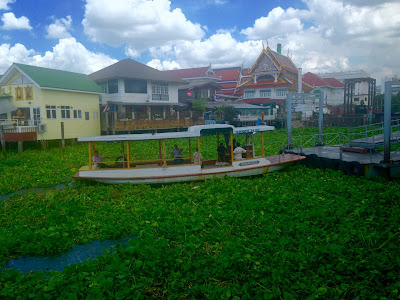 The area where the currents from the rivers swirl is completely choked with these water plants, and the boats just slowly push them out of the way as they motor through them.  I am not sure how they are actually able to keep them out of the propellers, but hey, not my problem...

Now, on to the fish.  These things are huge, and there are more of them than you can imagine.  The stalls near the waterfront sold massive bags of bread and fish food for about 50-75 cents and it seems the fish always knew when a person had made a purchase. 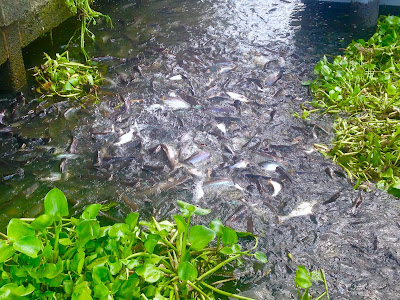 That is all fish.  The entire surface is covered with fish.

It is both a bit awesome and terrifying at the same time.

I want to point out that there are so many fish that some of them actually have to fight to get back into the water when they breach.  Pretty soon they are just going to phone in a bread order and then send one or two onto the land to pick up the bag.  Terrifying.

In a rather Kurtzian decision, we decided to head upriver. 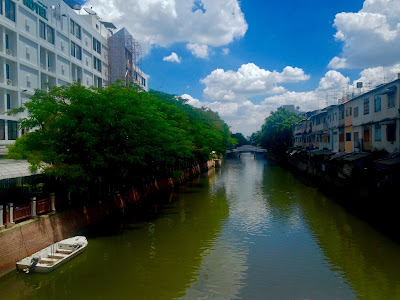 Geocache after Geocache dot the river, usually on or near the small bridges that allow pedestrians to make it from one side to another without being devoured by those terrifying monsters seen only a paragraph ago.

After about a mile or so, just when you think you are safe, you realize they are still in the water.  Like little packs of velociraptors.  Also there are monitor lizards in this water.  Something about Thailand seems like a bad movie where everything wants to eat you.

The canal slowly transitions from the tourist area to the actual market area.  Not the market where you can buy guady pants that have elephants on them, or pot leaf shirts, but an actual market.

You know, live eels, cats sneaking bits of meat that have not seen refrigeration in more than a few hours, chili peppers that will probably cause internal hemorrhaging, etc. 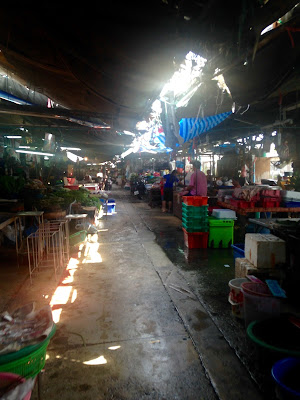 Eventually we made our way to a rather glamorous area of town and wandered around all of the official government buildings while searching for our elusive geocaches.  Thankfully there were not many people out today besides the ever-present tuk-tuk drivers who saw rather large dollar signs over our heads.

Anyone who wants to go into sales in an country could learn a thing or two from these guys.  They do not ever take no for an answer.  They know all about closing the deal.

I am pretty sure that this is how they train tuk-tuk drivers before they set them loose on tourists.

They sure do know how to build the government buildings though.  Wow, beautiful! 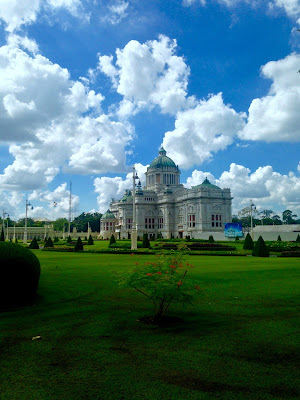 Finally, and mercifully after about 25,000 steps on our fitbits we made it back to the wharf for a nice cruise back to the car. 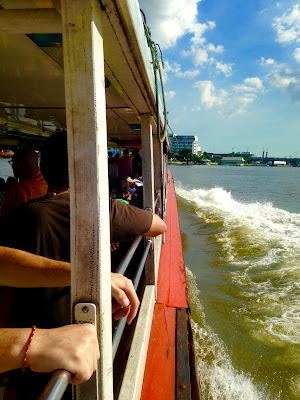 Now, for the funnier bits.  The first prize goes to this amazing marketing ploy.  Talk about taking a logo and running with it!  In your face coffee-yuppies! 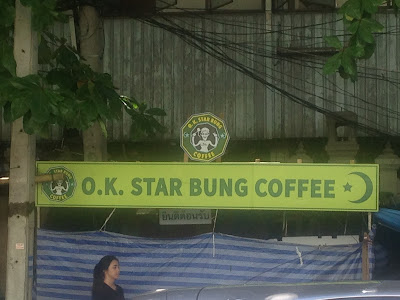 The second prize goes to this interesting choice on local and decor. 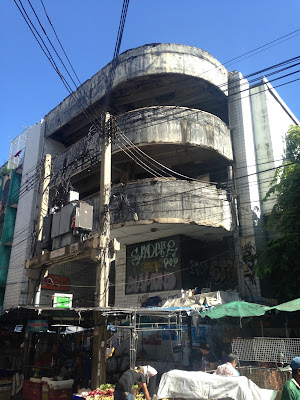 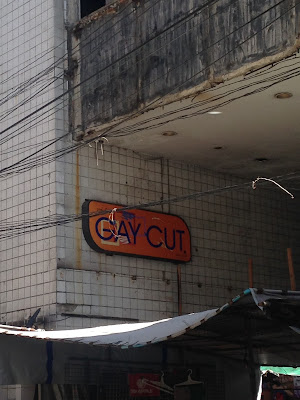 I just looked this up online, apparently that is the old location of a gay barbershop.

Not sure why we would need to specify it is a gay barbershop, but according to Facebook they have great reviews.  I am hoping those reviews are for the new location across town because they really need to hire a decorator, if it is still at this location...

The third prize goes to this statue that would be an obvious talking piece in any yard. 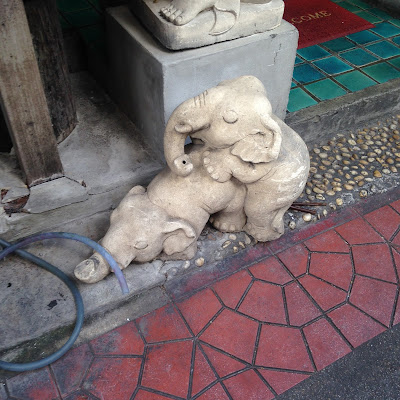 That image can never be cleaned from your mind.  You are welcome.
Posted by test at 11:04 PM