Rubbing the tummy of a tiger

I suppose I should start of this post by being fully transparent. No, I do not know much about tigers besides the fact that they are bigger than me, and would gladly eat me for lunch.


Also, they have huge teeth and claws.

There was also one in Jungle Book.

I doubt that last fact was relevant, but you never know.
So, we finally broke down and went to a place that makes you sign a waiver, boasts that their tigers are not sedated, and says they cannot guarantee you will get the photo you want, because... tigers.

We went during the hottest part of the day, so our kitty friends were a bit tired. Now, when it cooled off an hour or two later, those furry beasts were running around, playing in the pool, and beating the hell out of each-other. 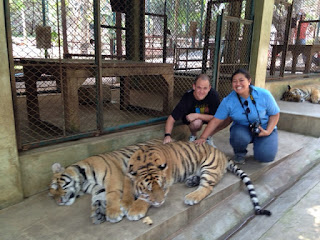 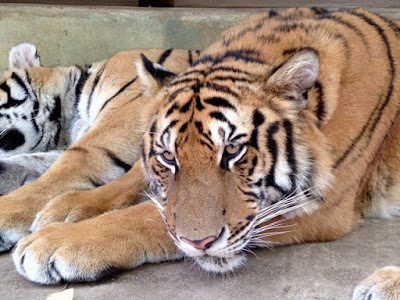 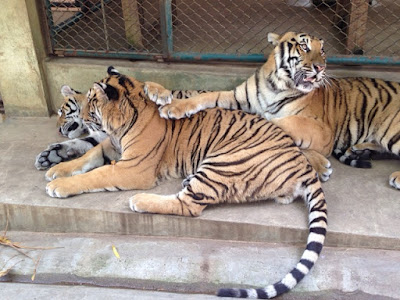 Calm to bat-shit crazy. Typical cats!
After steeling my nerves, we stepped into the cages. Now, they have had trainers their whole life, so they are used to people, and these trainers were there the whole time, but that first touch was a bit terrifying. Soon though, I was belly rubbing apex predators like it was the latest fad. 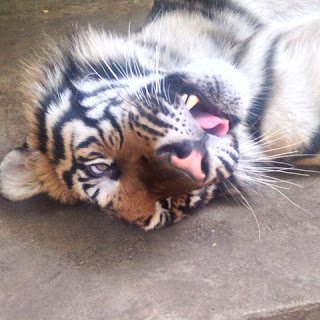 Now, I have seen mixed reviews of all of the tiger places, and I was hesitant at first.

Yes, I eat them, but I don't believe in suffering.

To answer the quick questions, should the tigers have had bigger enclosures? Sure.

Should tigers be handled by humans? Depends on your perspective.

Here is what I am left with though:
Did I leave with a new appreciation fir these cats?
Unequivocally yes.

Tigers are disappearing. They inhabit some of the most poacher filled and lawless areas of Asia. Parts of a tiger are worth more than someone in Southeast Asia can hope to earn in years. Tigers kill people and livestock.
Humans can and do kill tigers. Many times they are worth far more dead than alive.

I know that people will be offended by this post, but remember that the world does not always fit into your little black-and-white box.  As much as we would like people to always share our perspective, that is just not the way it works.

Sometimes it does take the captivity of a few tigers to bring the reality of their nature, existence, and survival to toe forefront of a persons mind.

Is Tiger Kingdom perfect? No.

Could it be better? Of course.

Does it raise awareness? Yes.

Rubbing the tummy of a tiger made me learn more about them, and appreciate them far more than any discovery channel episode could have.

It took the abstract and brought it to shaggy orange-and-black life. 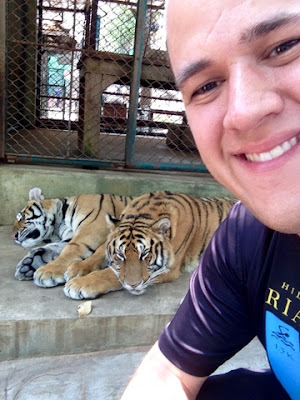