The Killing Fields of Cambodia

I wish I knew the words that could express the deep feeling that exists from the horrific events of the Khmer Rouge and Pol Pot.  When it comes to the Killing Fields and the S21 Prison in and around Phnom Penh, Cambodia, I feel that it might just be best to let the photos speak for themselves.

I usually try to lay off the heavy subjects on this blog.  There is enough sadness and horror in the world and I am not one that wants to glorify or perpetuate it.  The images below can and will be difficult; just a quick word of warning.

I learned a few things today.

1. The audio tour at both places will cause you to fight back tears for hours straight.  Period.
2. You will see entire bones from human skeletons surfacing after rainstorms around the Killing Fields.
3. A semi-feral dog can be made into a therapy dog with enough coaxing and squeezing.

The first stop of the day was the Killing Fields, located about 30 minutes down a somewhat bumpy road heading south of Phnom Penh.

The site is quite unassuming at first.  You walk in and see a massive stupa, and even though you know what is inside (skulls and bones of the victims of the Cambodian Genocide), but the area is clean and clear, with some chirping birds and a lot of ants on the ground.  After picking up the audio tour, which has to be one of the best audio tours I have ever heard, you just... walk.  The tour guides you slowly into the nightmare that was 1975-1979 Cambodia.

By nightmare, I mean something beyond that.  One out of every four Cambodians died during this time.

I wish I knew how to explain what I saw, but honestly I am emotionally drained.

I did not know that bones still surfaced at the mass grave sites.

I did not know how full pants and shirts from the people who were murdered still washed up in huge amounts.

I did not know that a tree was expressly used for killing children, or that the sugar palm fronds were used to cut throats.

There were a lot of things that I did not know, nor would I have ever known.  I might wish that I still was unaware of these atrocities, but I am also grateful that I can share in the collective knowledge of the events.  I was in a similar mood after visiting Nagasaki, Japan, and I feel that way now.  I feel some guilt for not being aware of these events on a more intimate level.  I feel a massive amount of sadness for the people who had their lives unjustly taken from them in some of the most horrific ways imaginable.  I feel anger that more people are not aware of these events and their personal impact.

Everyone has heard of Pol Pot and the Khmer Rouge, but seeing how this country still reels from the horrors that faced it about 40 years ago, just bring it to a light that I never knew was possible.  Children now play with dogs near the places where their families were executed a generation prior.  School goes on as normal mere meters away from a detention and torture center that still has barbed wire on it and odd stains on the floors and walls.

Without further feeble attempts of explaining facts that I was horrifically unaware of a mere 12 hours ago, I will stop talking and let the photos speak for themselves. 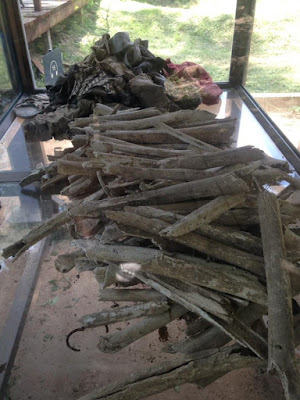 Recently surfaced bones before final interring in the central stupa 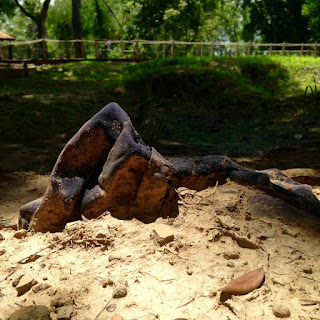 Clothing surfacing after a rainstorm from a mass grave 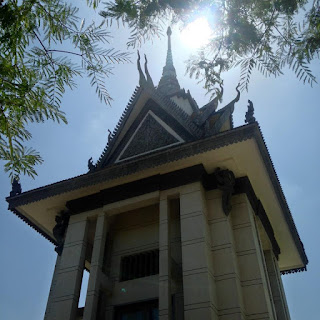 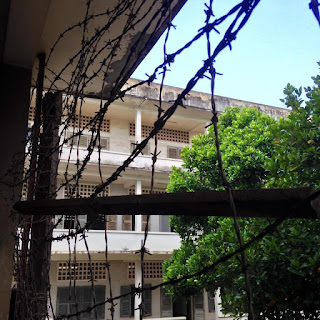 Barbed wire covering the breezeway at the S21 prison 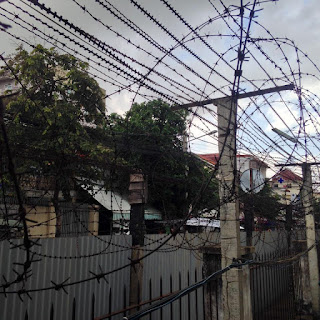 Barbed wire around the prison, much like the day it was liberated. 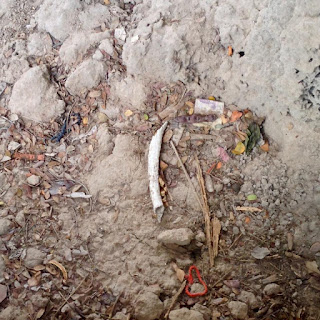 A bone surfacing after the recent storms 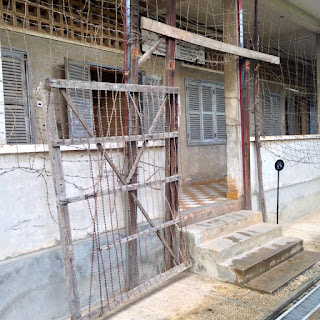 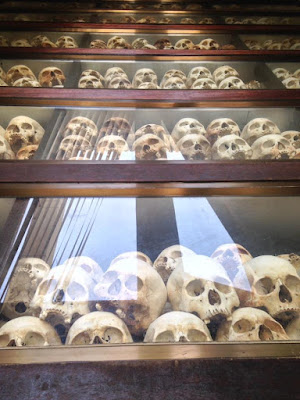 Skulls in the central stupa. 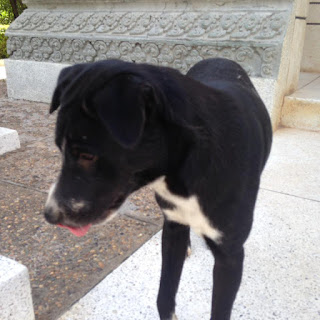 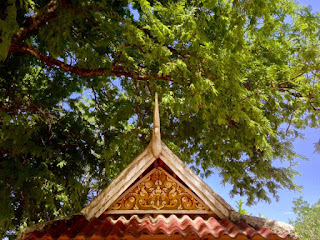 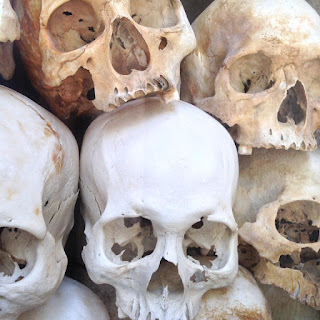 Skulls of the victims, market by nationality and cause of death. 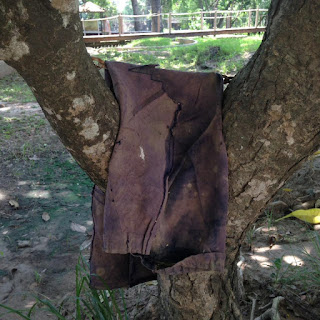 Surfaced pants that had been moved off the ground 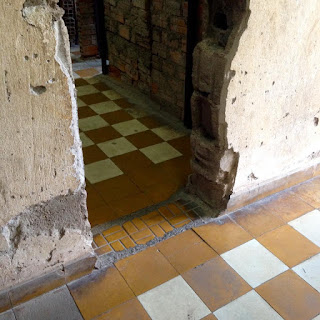 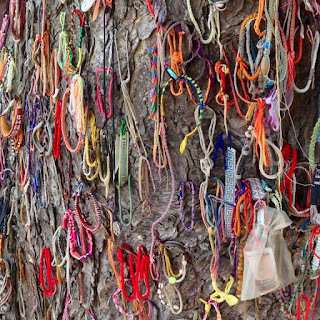 Ribbons, candy, and toys left on the tree where babies were executed by blunt trauma.
The idea was that to "remove the grass, you also need to pull the roots."
The accusation and extermination of one family member meant the whole family would die. 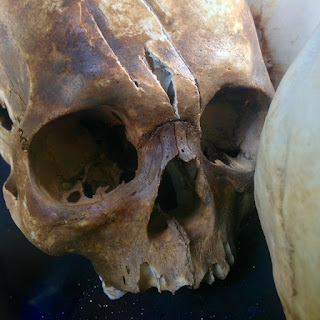 Death caused by hacking with a hoe or machete 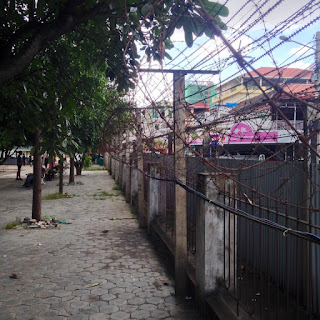 The fence at S21 prison 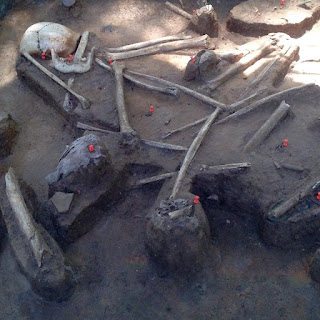 A skeleton, still waiting to be fully exhumed 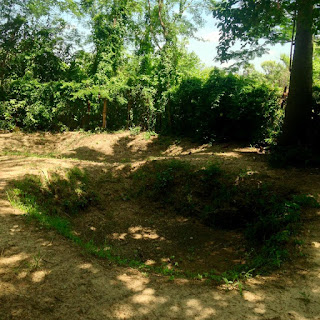 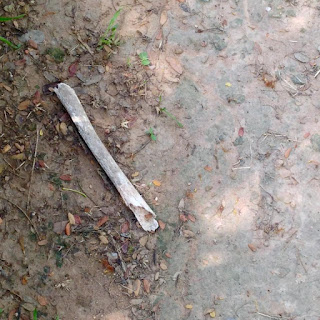 A bone, possibly a femur, that has not been picked up yet by park docents to be cleaned and interned.  The rainy season has just started in Cambodia 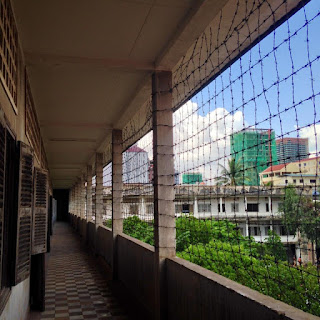 The old and new meet in Cambodia.  A view from inside the torture chambers of the S21 prison towards central Phnom Penh.  The barbed wire and death of the past frames the skyscrapers of the modern era.  The two eras only missed each other by 40 years. 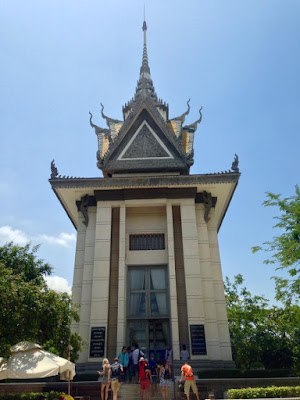 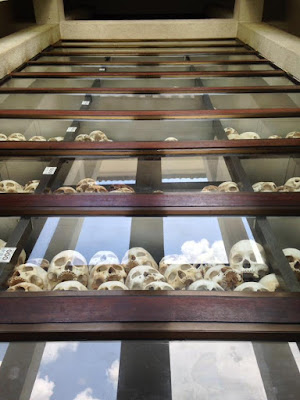 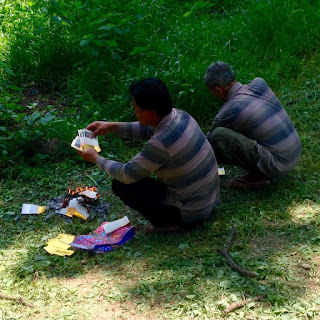 Villagers burning prayer offerings for the children who were killed 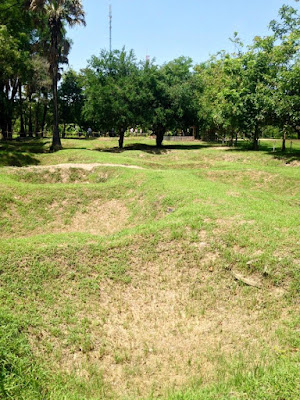 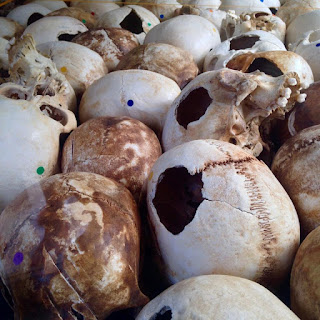 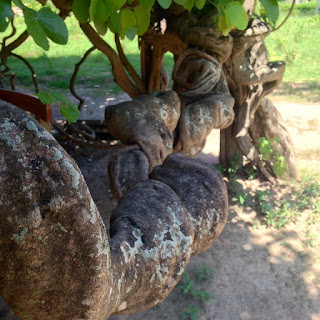 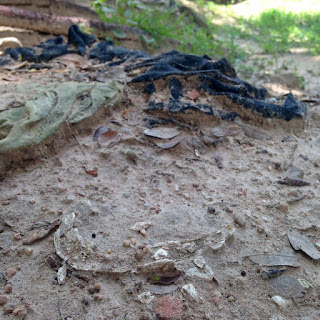 Clothes and unknown objects surfacing after the the rain 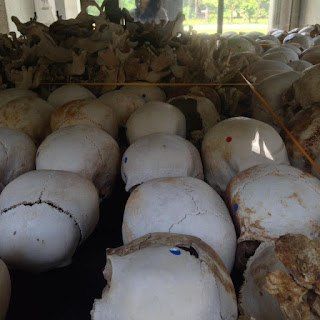 Skulls have a colored dot and a small number on them marking nationality and cause of death as determined by a team of forensic scientists.

A side note: To people who are unfamiliar with South East Asia might find the display of human body parts as being insulting to the memory of these victims, but they are put on display with extreme reverence and it is done in part to "help their souls find peace in the next life"

I guess the simplest way to think of it would be to say, that it is better to remember their lives and use that knowledge to ensure events like this do not happen again.