Packing up everything I own and moving has been one of the most time-consuming things that I have had to do in recent memory. It is both something that I find myself dreading each day and also getting anxious for if nothing is being done.  Simply put, we have years of accumulated things.

Sometimes I feel like I should just get rid of everything and start over. Sometimes I feel like this is the wrong move and it will ruin everything.  I know it is quite easy to act nonchalant and just chalk it up to the idea of adventure and exploration, but it is a nightmare of emotions and a whirlpool of memories.

So far we have found trinkets that date back to God-knows-when that take on importance that they never had to begin with. We have also found items that should probably have been thrown out years ago that somehow got a falsely inflated position in our packing boxes.

The house is a nightmare. It looks like how I picture Dresden during the carpet bombing phase of World War Two.  I would not be surprised if I found a family of seven living in a cardboard box tomorrow morning queuing up for bread and coffee when I leave for work.

It has been fun and exciting along with downright miserable. That being said, it was quite cool to take a picture of all of the running medals that I have gotten over the years. I have not run as much during the past month, and it shows, but it still is a sense of accomplishment and a challenge to get back out there and hit the pavement. 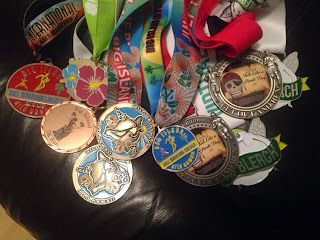