After a few more days of building and testing, we have finally made a working model of a trebuchet.  The best part of this situation is that the student have had the opportunity to learn more than just math and physics, but have also had the chance to learn a skill that many students do not get to learn in a school setting.  By the time that this unit reached the end of the building phase, many students were lashing logs and tying knots with minimal assistance and were able to think on a much more geometric level in their understanding of strength in construction and how to plan on potential weight issues in building. 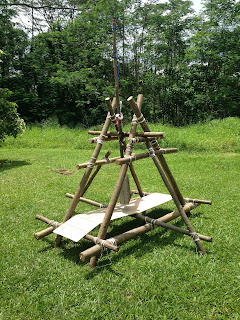 As you can see, the final product is all items that we scrounged around campus, and is completely made with only sticks, rope, a block of concrete, and a single nail.  The nail is used in the firing pin, and that is only because we did not want to have to tie on a smaller stick for fear that it would not last as long. 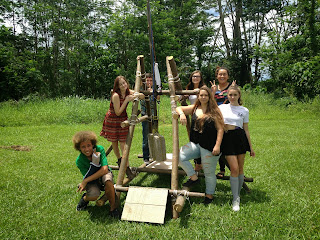 We had to take a picture with everyone crowding around their finished siege weapon, (just in case it broke on the first shot).  Thankfully it did not, and we were able to fire about ten times on our first day of testing.  The hard part of firing is to try to get the item to release at about a 45 degree angle so we can reach maximum distance.  Of course that takes a good deal of trial and error, but by the last shot, we were able to at least release at an upward trajectory.  We were using a rather light object, and plan to try with heavier projectiles next class, which in theory should release earlier.

One of the students was charged with the task of taking a slow motion video of the launches so that we could analyze the degree of launch.  The following video is in slow motion and you can see a projectile in the upper left-hand corner of the screen leaving the frame shortly before the end of the video.

We are still finishing up the trebuchet from the other class, and I will post about that as soon as they are done.  I can honestly say that this class far exceeded my expectations and did a stellar job in the construction and implementation of this project.