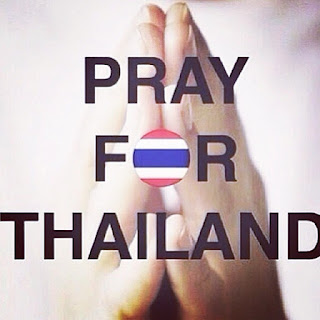 There are a lot of shocking and very graphing pictures being broadcast to the world of the new place that I call home.  I had originally started a post tonight on the wonderful experience I had heading to a teacher retreat and talking about a few of the beautiful places that I saw along the way.

That all changed when I got the news and started seeing the pictures come in via the "Line" app of the bomb(s) that went off in Bangkok.

Just letting everyone know that I am fine, and I have been told by multiple people both in and out-of-country to be wary right now. Thank you all very much for your concern and your love.

I am deeply saddened though, in my time here I have found the Thai people to be full of love and compassion that is unparalleled throughout the rest of the world.  While I know that there are always fringe minorities, for the most part my experience in moving to a new home has been met with helpful people who want to show the world that their country is one in which they can be proud.

Yes, they do have a problem in certain areas with an insurrection of sorts, but the majority of people here want to just live peacefully - just like anywhere else in the world.  As of 10:15pm, Bangkok time, that group has not been identified as being responsible.  I can only hope that no one jumps to any rash conclusions or any minority groups get unjustly blamed.

No one deserves to be the brunt of such a misguided political or ideological malady like terrorism. Period.  There is no cause so great that one must take out vengeance on casual passers-by.

The pictures that have been sent around on the Line app have been far more brutal than the news is going to print.  Most of them look like an image that would have been taken out of a war-zone.  I have no intention what-so-ever of posting anything like that.  I will leave it as a simple picture of "Pray for Thailand."  To me, honoring people who have been lost by remembering them as who they were is much more important than sensationalizing the method in which they passed.  These are humans - family members, friends, and neighbors.

I can only hope that when the sun comes up tomorrow, that people are able to start the healing process.  As for tonight though, keep the good people and visitors of Bangkok in your hearts, and make sure to take an extra moment and appreciate those amazing people that are in your life.

With all my love and compassion to the people who were hurt and killed today, I will leave this post short - somethings cannot be expressed clearly with the written word.