Unknowing entry into a refugee camp, and our subsequent removal...

Warning: Mom, do not read this blog post.  Seriously, you will thank me.  It was a great learning opportunity that went a bit awry.  These things happen, but I was safe and took as many precautions as I could.  Love you!  Don't fly over here and kill me...

Preface: While we were staying at a small resort located near the Myanmar/Thai border, I found out that I had about four hours of free time.

I can get in a lot of trouble in four hours...

After some research on the area, I figured out that it would be very interesting to make it over to the border.  I evaluated my sources of transportation and came to the conclusion that a bike would be the best method of getting to the area. After explaining my thoughts to a local who runs the resort area, he started laughing and then told a few other people who all started laughing as well.

This is where our story begins

So, after some haggling and some assurances that we could in fact get into to see the camp, the school, and the hospital that were located there, a friend (who came along and is a pretty awesome adventure seeker), and I took off in the truck. 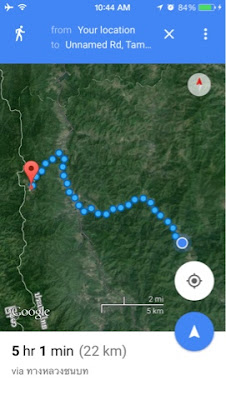 That line separates Myanmar and Thailand.  This area has seen a lot of roving bands of fighters from about a decade ago until, oddly enough, today.  I just checked the news and they have agreed to a complete cease-fire today.  Talk about timing? The area is "safe" now, but the refugees have lived in a state of UN funded limbo for the past decade.

Looks can be deceiving...

This was one of those moments.

The driver and our translator set out at a nice pace, and then promptly turned off of the paved road.  This is usually where my adventures turn sour.  Thankfully I had been letting my GPSr run in my backpack with various way-points being stored so that I could find my way back, should the need arise.  During the drive, we were asking a lot of questions about the refugees, what the history of the area was, how they lived, etc.  Anything to try to understand what was happening there.

The military checkpoint was first.  This is the spot where we were told that we could go to one precise point.  That one point was the only place that the guard on duty would allow us to see.  Apparently the driver was not paying attention and decided to skirt that one point and make a road of his own.

We parked and I purchased a few little things. I honestly did not want to purchase anything, but I am pretty sure it is required of someone when they are visiting a refugee camp.  Plus, the packet of... food... that I purchased was exceptionally cheap.  I was also offered a bag of leaves, but more on that later.

Out of respect for the people and due to the fact that we were told not to by the first guard, I am not going to include any pictures from inside the security perimeter.

I cannot stress enough just how nice and inviting these people were.  I love the fact that they might live in extreme poverty, but they are just the same as anyone else.  They are great people.

We started to walk further into the camp and this is where things turned south. Our guide, who apparently has no loyalty whatsoever, heard a yell and started running towards the truck. My friend and I noticed this and took off at a rather similar clip to catch up with him.  I speak no Thai, but when someone starts running for the truck, I figure it is smart to take off after them. We piled into the truck and were informed that we had to get out of there fast because the military was ANGRY!  There were radios out, there were threats.  We were not welcome.  Period.

Note to my audience - do not piss off the Thai military.

Later my guide said to me - "I don't think you realize how serious it was..."

No, I did. I really did. It was freaking obvious when he started running.

Me and my freaking great life decisions.

Needless to say, I have now had the privilege of visiting a Myanmar refugee camp and have been escorted off by a rather effective and professional military.

Not before we took these awesome pictures - 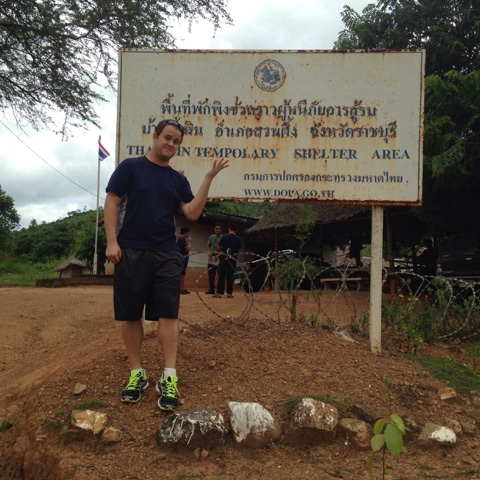 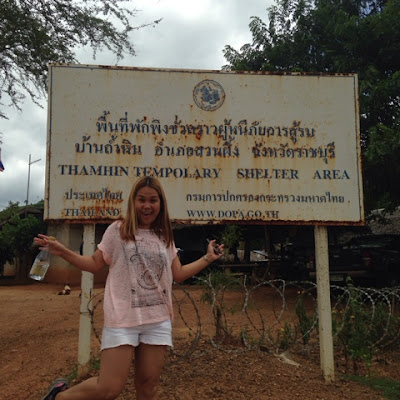 How many people do you know that have been forcefully kicked out of a refugee camp by the military?

I also learned quite a bit about the underground railroad that people take to get out of the refugee camp, how to tell the different types of bananas, and how to tell the refugees from Thai people based on clothing choices. Quite an educational day.

Also we did not get arrested or shot.

Also, whatever snack I purchased from the UN food drop was delicious. 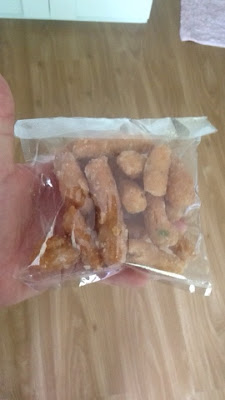 I was also offered what I am pretty sure were coca leaves, but politely declined that offer from the very impoverished refugee. After we left the area, and I looked up coca leaves on google image search, I am doubly glad I said "no." Nothing like being offered kilo sized bags of coca leaves to really make you realize that you were raised in a sheltered environment. Thankfully, I decided to limit my mistake making for the day and keep that one out of my "achievements."

Perhaps we could try again tomorrow now that the Myanmar rebels have signed a ceasefire with their government.  I am guessing that tensions will start to ease up just a bit now that there is less worry about cross-border incursions.

If anyone is curious about what the camp looks like from the air, I included a map that is downloadable as a pdf file here.

Email ThisBlogThis!Share to TwitterShare to FacebookShare to Pinterest
Labels: refugee, thailand, what not to do
Location: Thailand