This will be an explicit post.  I did have pictures of this process, but we lost that memory card somewhere between the packing of our bags and our adventure in the station wagon to the airport.

Again, if you are against the idea of killing and consuming animals or descriptions of how it is done in other countries, I would just skip this post.

You have been warned.

You will see text in red telling you where to stop reading if you wish to skip the graphic material, and then in green when it is over.  The explicit text is also smaller so that you can skip through it faster if you so choose.

As I learned while I was in Samoa, pigs are purchased based on a certain number system.  The larger the number, the larger the size of the pig.  Of course, this could be totally incorrect information as I am sure there was also a degree of joking around that might have gotten lost in the language barrier, but for the sake of this blog post, we will assume that everything can be taken at face value.

We had ventured down to Samoa for a ceremony that was to feature my wife and her sister.  This ceremony was to prove to be an adventure by itself.  We spent about three days preparing for the arrival of some very important people and just about everyone in the surrounding village.  This of course meant lots and lots of food.

For most Americans, this would mean that a morning trip to Costco followed by an afternoon trip to Wal Mart to buy all of the needed items.  Samoa of course operates under a bit of a different idea.  We first had to venture to some sort of warehouse in downtown Apia to buy things in bulk.  We needed to buy noodles.  If I have ever seen what I would picture a black-market stock room would look like, it would be this place.  We entered through a side door and went up to a counter.  Behind the counter were cubby-holes that went all the way to the top of what must have been a 15-20 foot ceiling, each labeled with a number and holding an example of the product one could purchase in the cubby.  We found what we needed, ordered a quantity, and waited.  While we waited, goods came and went, pallets were brought in and large quantities of unknown goods were loaded in the back of trucks, all under the watchful eye of a man who was both very interested in his clip-board and his cigarettes.  Soon thereafter we were beckoned around the side where someone brought us what we had ordered.  It was like someone had taken an old Sears catalog, filed it via picture, and then had some very sketchy looking person running the operation who might take your kidneys.  Needless to say, it was amazing.  Also I was terrified to take a picture.  Sorry, but some pictures are just not worth the risk.  God only knows where my organs would be right now if I had tried...

Next was the fish market.  Fish, on tables, with only the slightest hint of ice.  Each person had about four or five fish in front of them, on a sloped and tiled surface with long troughs that led to drains.  Each fish was just slightly chilled, and you spent a lot of time inspecting and haggling over a price.  We purchased two tunas that were about 100 pounds pounds of cumulative weight for the price of about $30.  Not a bad deal if I do say so myself.  Pretty sure I got taken to the cleaners.

Then came the more difficult items.

The morning before the ceremony, a truck pulled up to the house. On board this truck were about eight "number two" pigs, and one cow who happened to be named Rambo.

I did not name him Rambo, he arrived with that name.  Just for your information.  I would have named him something closer to Mr. Moo Cow.

Part of traveling is seeing things that you might not be used to, nor be very comfortable seeing.  I did not grow up on a farm.  I never had the chance to slaughter an animal.  I know that if I was starving and it was a choice between the animal and myself, that I would have no problem doing what needed to be done, but I do not take joy in that fact.  However, I was in Samoa, and I would be denying myself of a traveling experience if I did not watch what happened next.  Though I knew it would probably not be the most pleasant thing to witness, I also knew that it would be frowned upon if I did not at least go and observe.  Being male and a visitor, this was expected of me.  Sometimes there are social obligations that you should follow that are a bit beyond your own comfort zone.

Again, if you cannot, or do not want to read about an animal dying, this is the place to stop reading. Morbidity does nothing for me, but I do feel that it would be doing a disservice to the experience if I do not retell what happened.  Skip down until you see the picture of the cooking pigs and text in green if you wish to skip the graphic parts.

The pigs were first.

The pigs were brought one-by-one from the front yard so they did not get spooked.  There was a ten gallon bucket that had been filled with water up to a point about six inches below the top of the bucket.  The pigs were smaller, not fully grown, hence the distinction of them only being number two pigs.  One by one, the pigs were held by one of the stronger men, face down in the bucket until they stopped fighting and died.  They were then bled.  I asked why they were killed this way, as most of the time we usually just bleed a pig when we want to eat it, and I was told that was just the way it was done for that size of a pig.  One pig was able to break the bucket with his fight.  This one had to be killed using a metal bar to choke it to death.  It was not pretty, but again, I am not writing this at all to judge.

After all the pigs were dealt with, they walked Rambo away from the house.  They had secured a gun from the neighbors house, but after it failed to discharge, they had to find another way.  The only other method they had at their disposal was an ax...  I wish I could say that his end was a quick one.

After this was all done, the meat was quartered and cleaned on a tarp and set to cook.  The interesting thing is that the quartered meat continued to twitch and move for an hour.  I had never seen quartered meat twitch and pulse like that before.

Needless to say, the meat was delicious.  I was used to hunting the on the vast savannas of Safeway, stalking my kill for minutes while it was under cellophane.  This was very different. 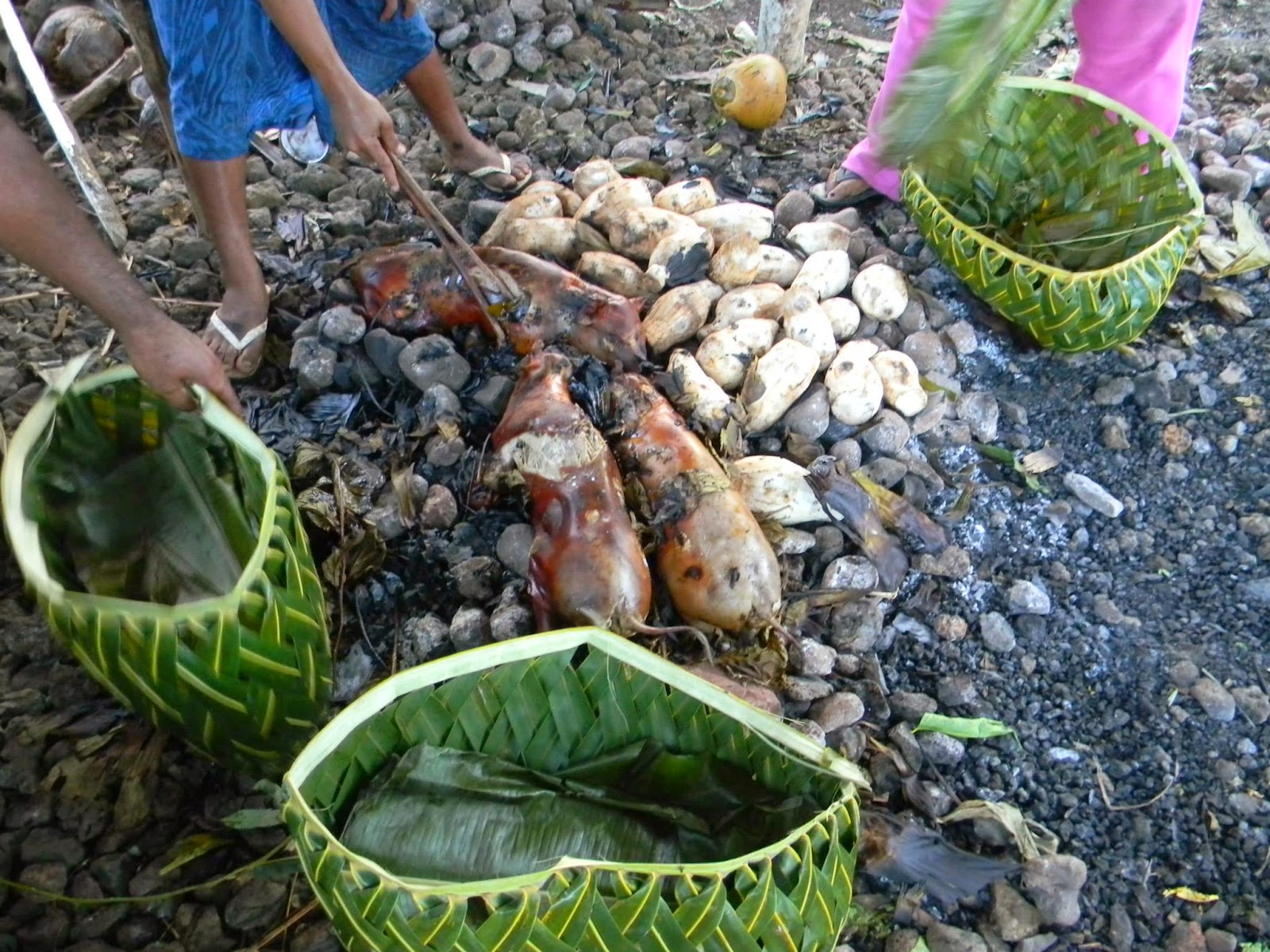 The traditional cooking method is an umu, which is basically done by laying the item on a bunch of super-heated rocks.  It is a very long and hot process that takes a lot of skill to do correctly.  The baskets you see in the above picture are woven from palm trees and made specifically for carrying the meal items to and from locations. 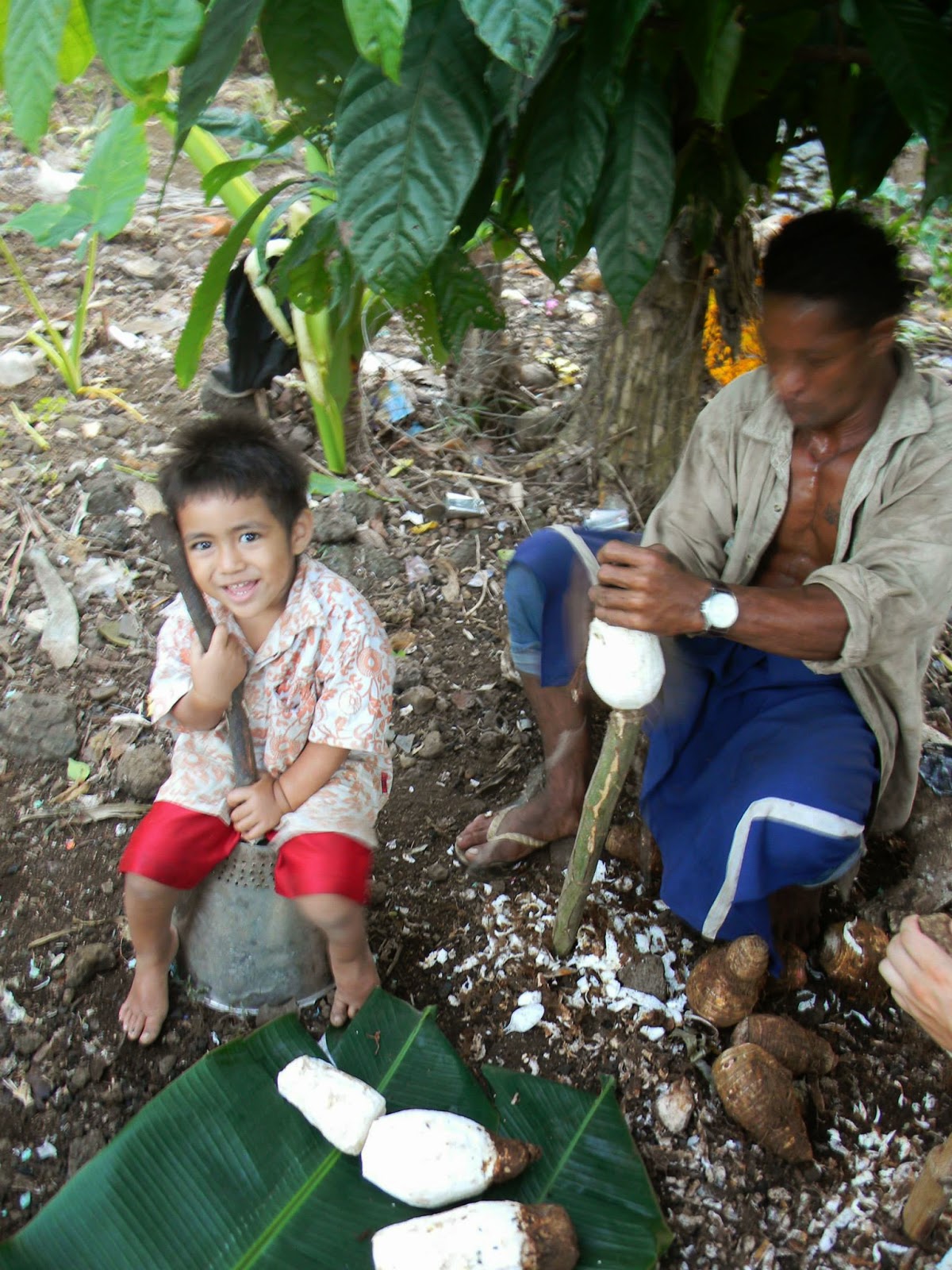 In a society that has traditions that have been handed down longer than many countries recorded histories, there are certain tried and true methods that can always be used.  Yes, paper plates and western commodities exist all around in Samoa.  You can walk in any house, see an older television set, a Nokia cell phone, and all sorts of other things that a person from the United States would call basic necessities.  Here though, there is still a sense of pride in doing certain things in very specific ways.  For this sort of ceremony, the above picture was the only way it could be done. 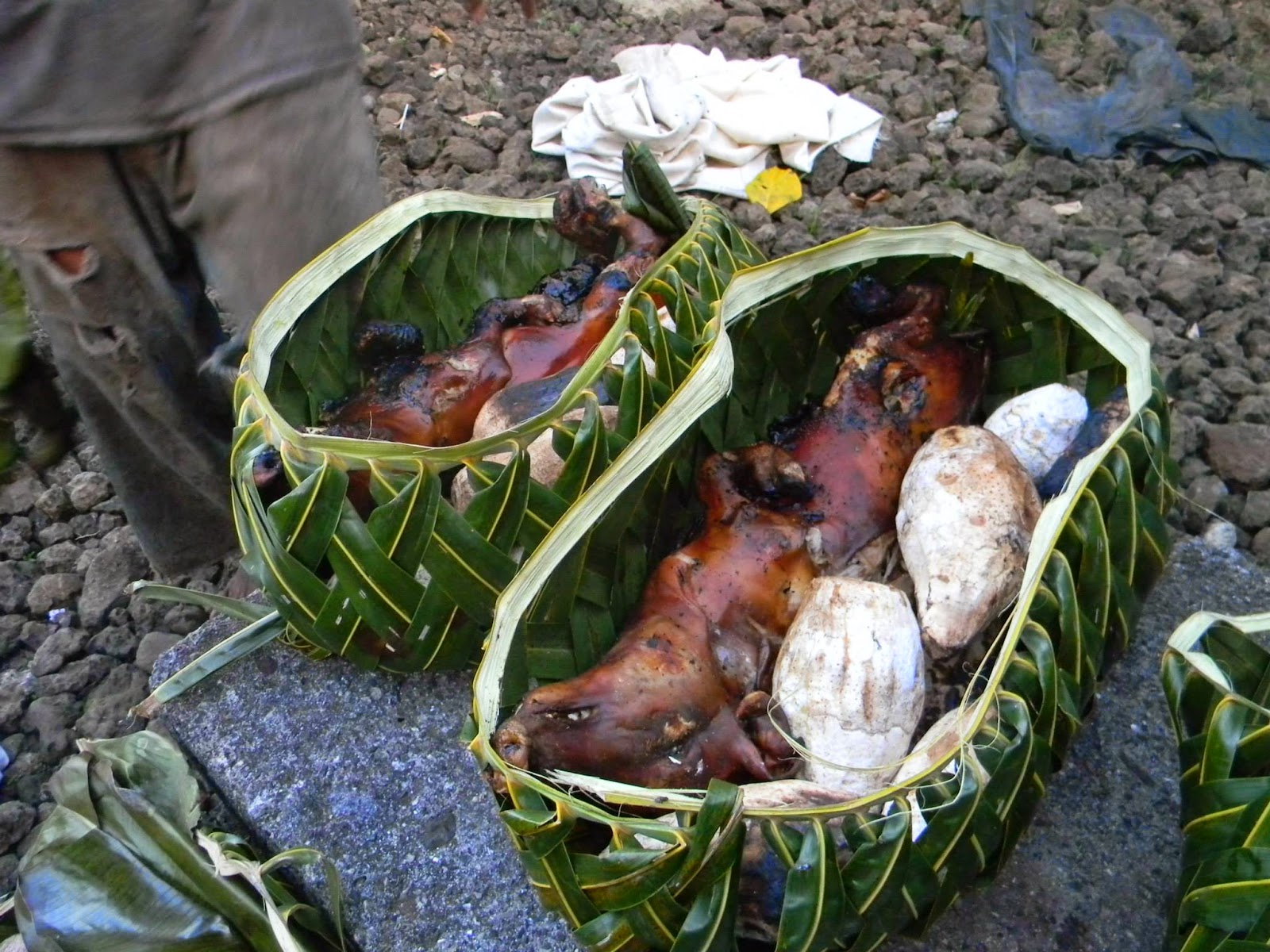 For people that may have a problem with how animals are viewed and treated in other countries, you need to remember a key idea of traveling - you need to not judge another group of people on their cultural practices.  Yes, certain things may be different or downright cruel when you look at it from your own cultural perspective, but that is your own viewpoint and not theirs.  You need to remember that not everyone was raised with the same social, moral, and cultural codes that you hold so dearly.  Yes, there will always be a shock value to the differences that we see in other people, and certain personal moral values cannot be compromised, but before you rush to judgement, attempt to ask and understand.  If you cannot find a moral compromise after asking and attempting to understand, then perhaps that region of the world is not for you.  At least you can say that you tried. 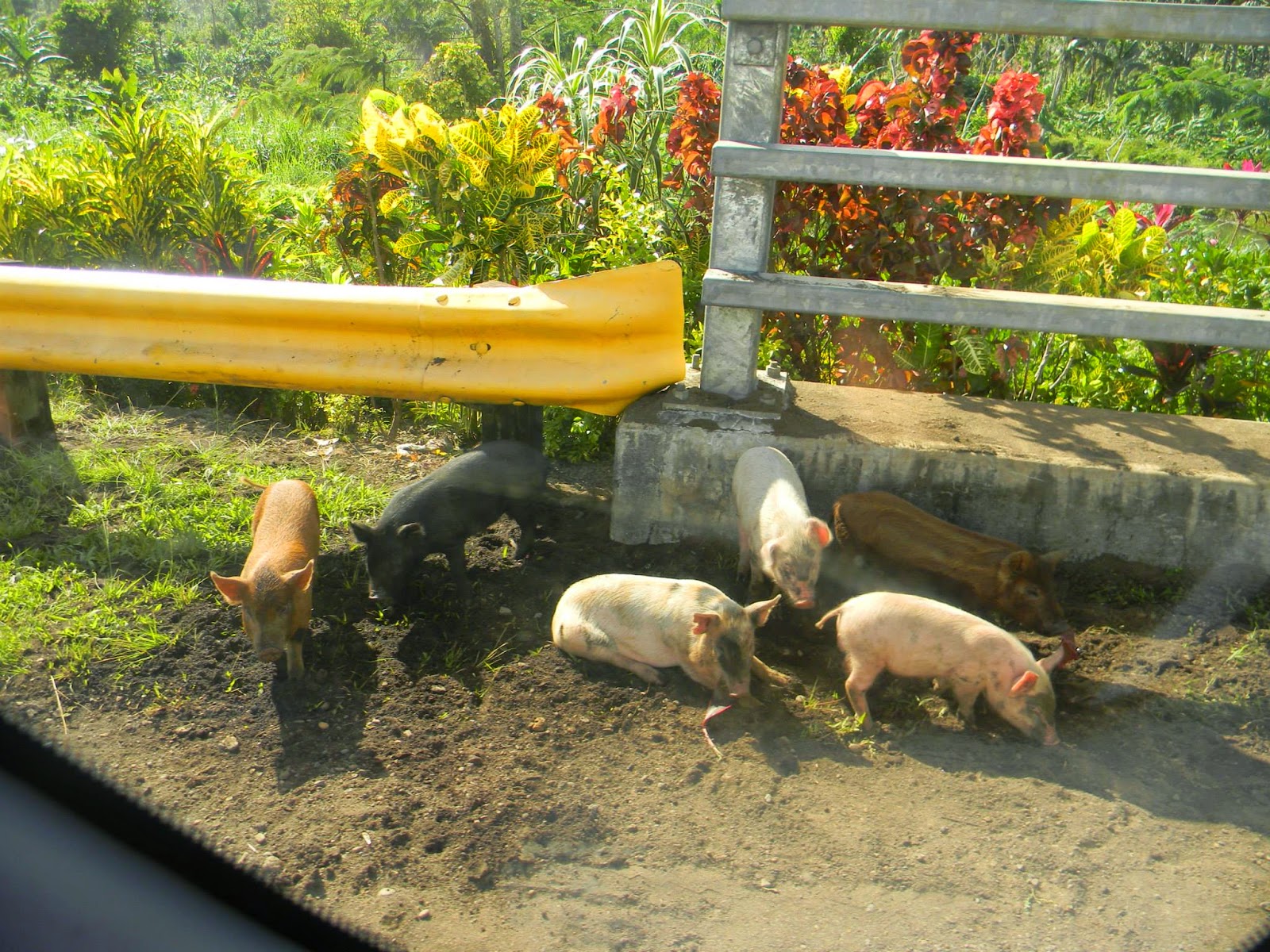 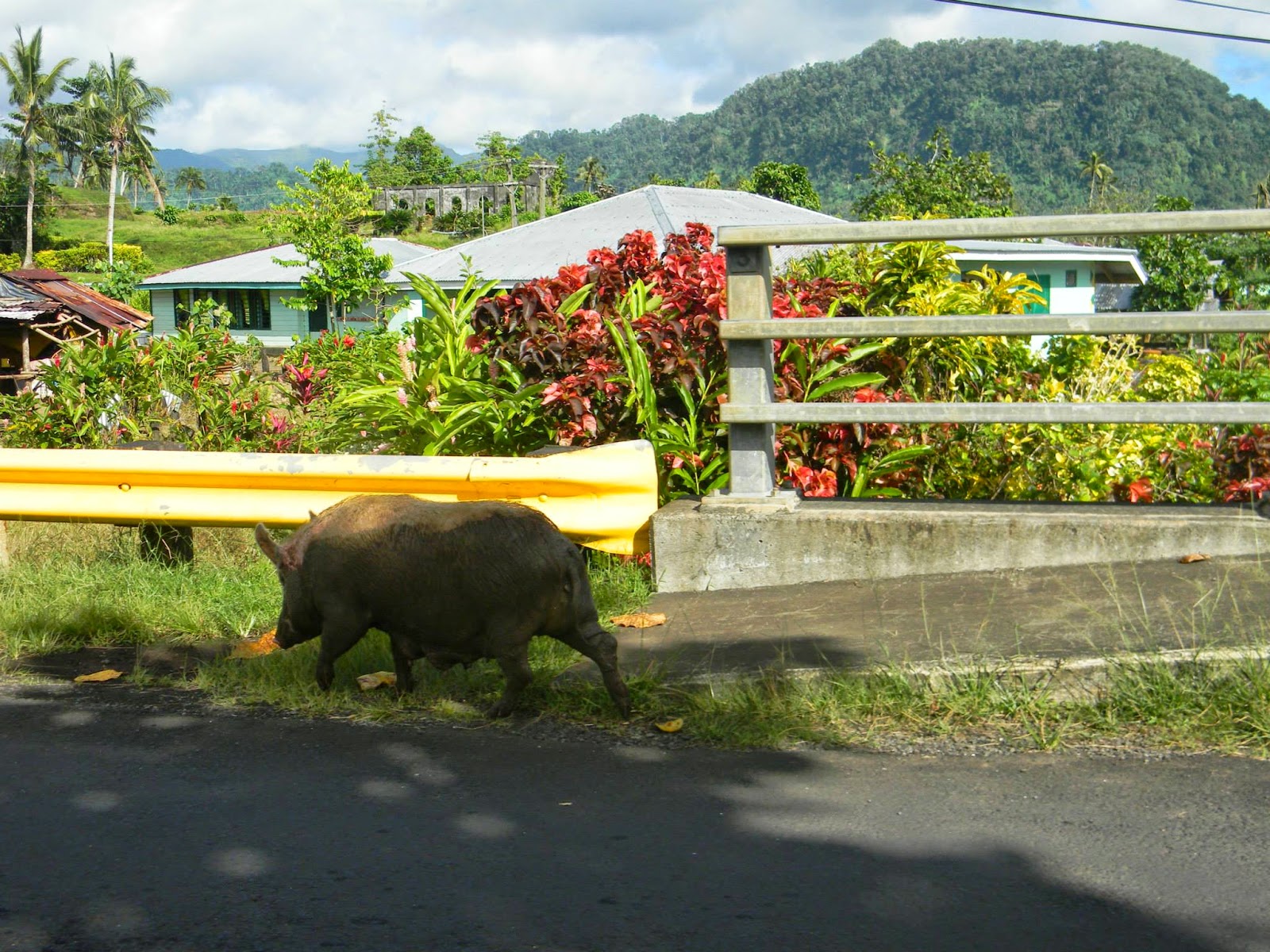 Obviously Not a Number Two Pig