A Side Trip to Meet the President

President Obama is a very famous person in one small town on the coast of Japan.  After stumbling around on couchsurfing, I accidentally came across a small town called Obama.  I knew that this must be a side trip during our Japan adventure.

It was amazing and so worth it. 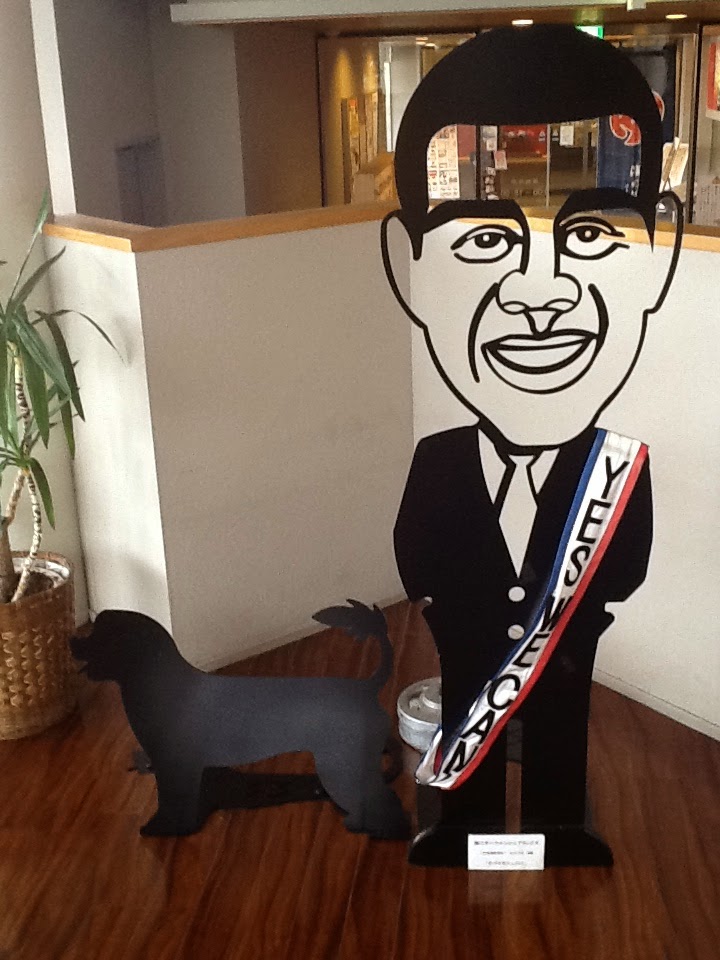 Love the guy or hate the guy, you have to respect a town that will put up posters and murals about him.  Apparently during election time in the United States of America, local and international press will descend like a plague of locusts down on this town to interview people about... Obama...

They also sell special Obama mochi and other goodies. 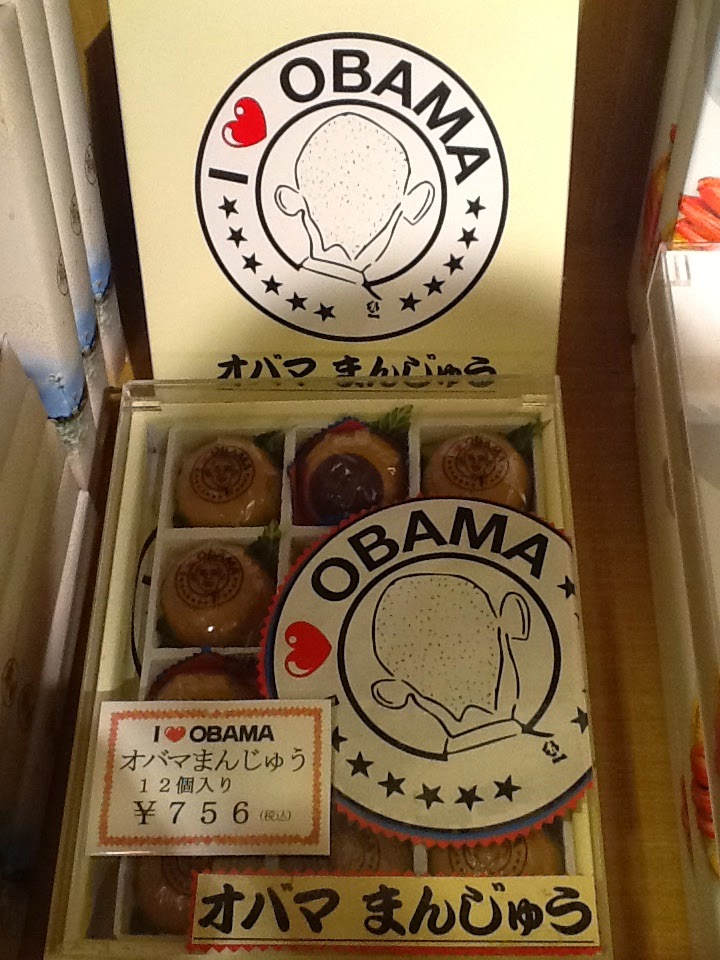 If you have ever wanted to see a beach scene with President Obama wearing American flag swim trunks while hanging out with a cat eating mackerel - this is for you. 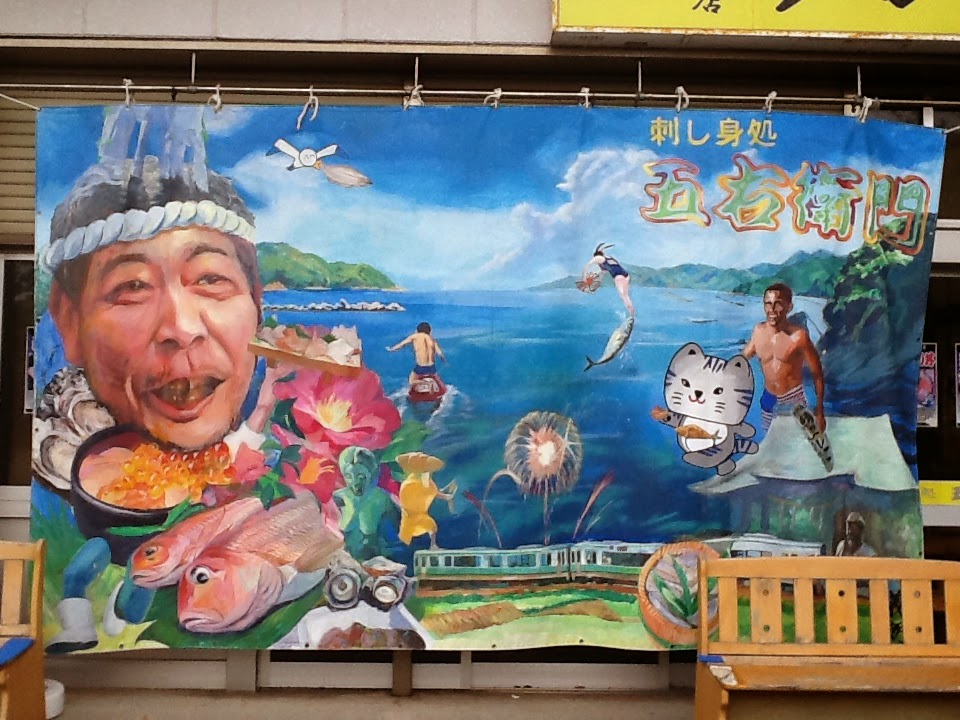 While this visit to Obama started off as a quest to see a town and having the same intentions as the reporters who are only interested in it for the name it is graced with, it turned into one of the places that we will have to go back to at some point in our life.  We were picked up in Kyoto by an amazing person who lived in Obama, and drove us two hours to his home town.  During the trip we found out he was a huge fan of all things Hawaii and even had some Hawaiian music for us for the car trip.

I also discovered a superpower I was not previously aware of during this car trip.

We were having a discussion on monkeys in Japan, and I commented that I had not yet seen any of them.  As soon as I finished that sentence we saw a family of monkeys on the right side of the car.  Those were the only monkeys that we were able to see during the entire trip.  Yes, I am amazing, book me for parties.

Obama is a small town with an amazing feel, much like that of any smaller port town in the United States.  A majority of the infrastructure of the town revolves around the fishing industry and related support industry.  We were able to stay with a family that has lived in the area for many generations, and our host took time out each day to show us around the city.  His generosity was unmatched and we could never really thank him enough.  He and his family fed us and showed us the secret locations around the city that could only be known to locals. 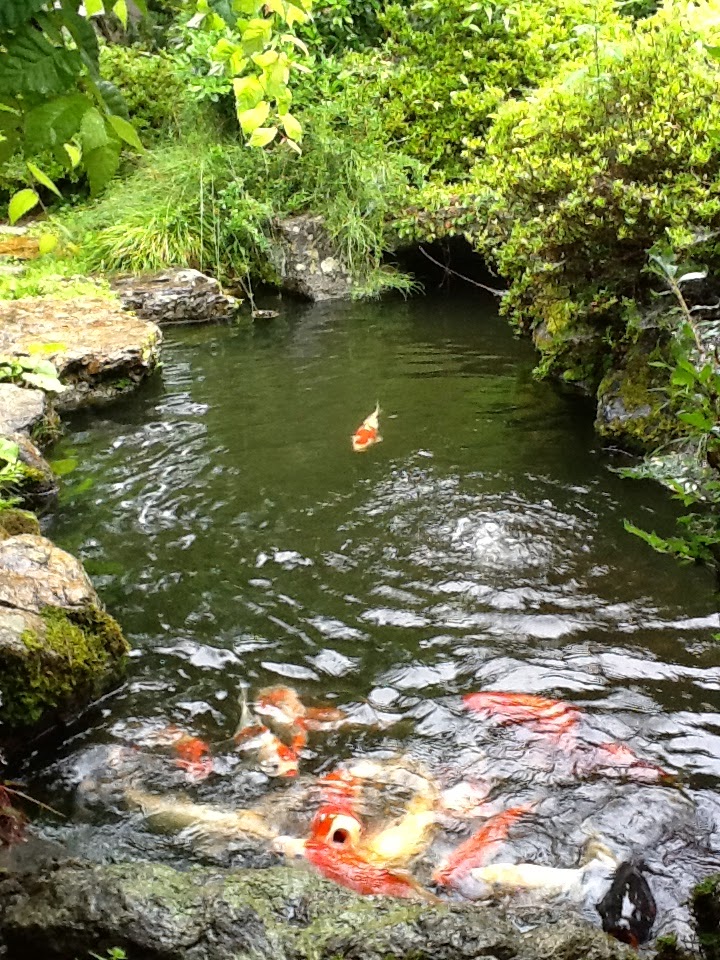 Koi Pond in the Center Garden of the Home

The port area itself is quite small, and everything is a little weathered by the constant ocean air, but if you ever get a chance to make it to Obama, you have to check out a few things.  The first is the statues of the mermaids which are strikingly beautiful in their simplicity. 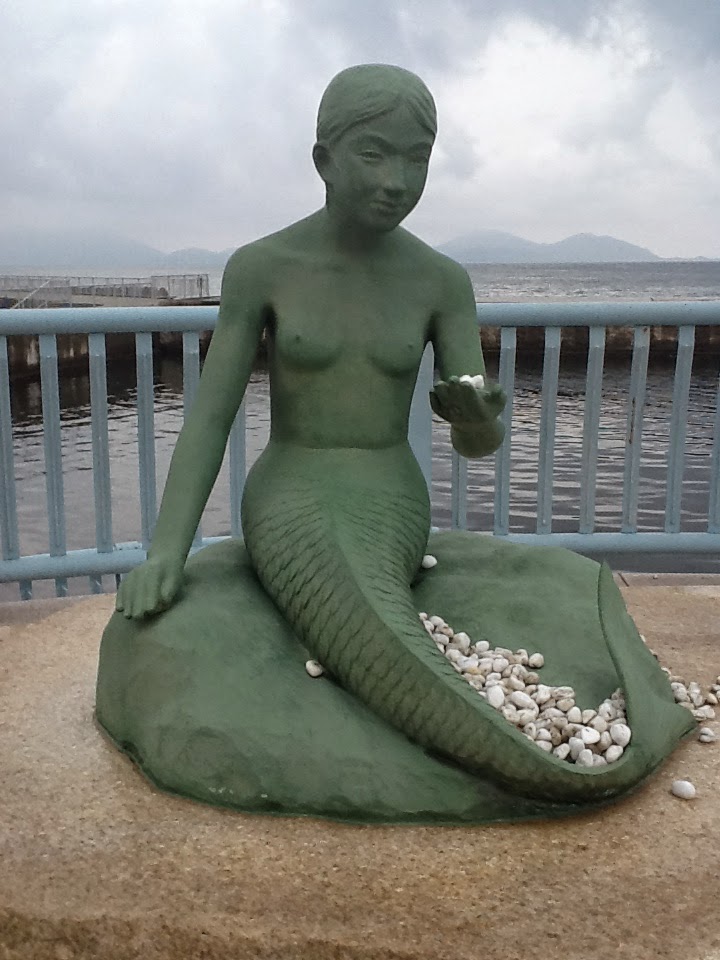 The second is the beach area near here where we were able to spend some time beach combing and just enjoying the smell of the salt air.  Beaches in this area are used less that we would use them in Hawaii, so the road down was much less maintained, but it really fit in well with the overall feel of the area. 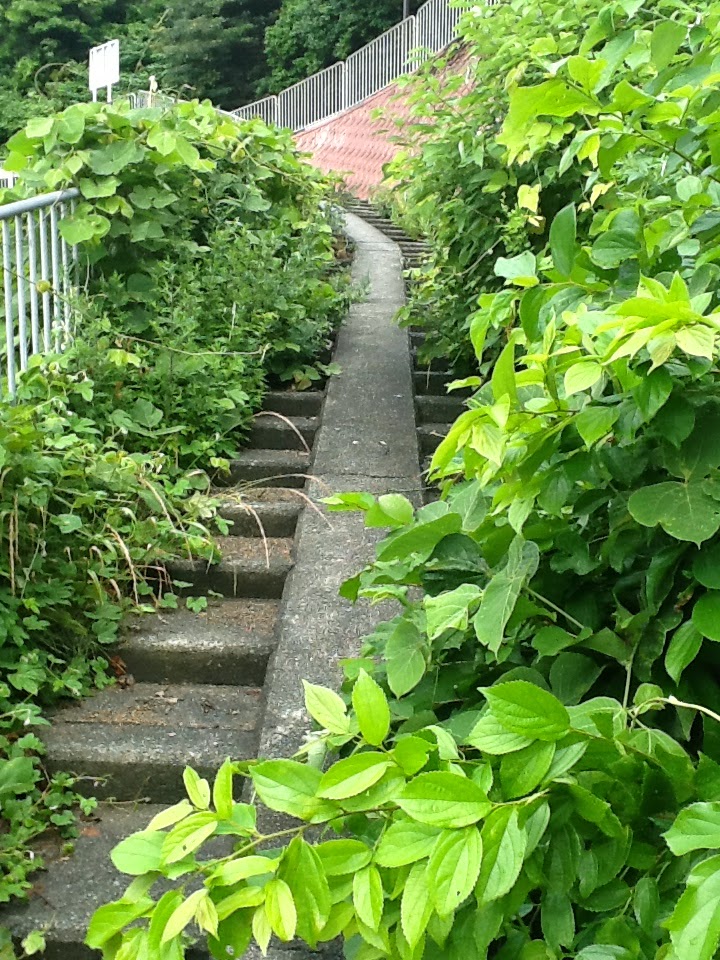 Another great thing about staying with local families is their knowledge of the history of the area.  We were able to visit a few shrines and even went to a monument for a Japanese battleship that was destroyed during an American bombing raid during the Second World War.  Sadly there is not much discussion to this day on the war dead in Japan, and the United States history books rarely ever show Japanese as anything but aggressors during this time period, so it was nice to see that shrines and monuments are still kept by the local populace.  Hopefully in time we will be able to view the citizens and soldiers of Japan with the same respect that we put on western nations during that time period. 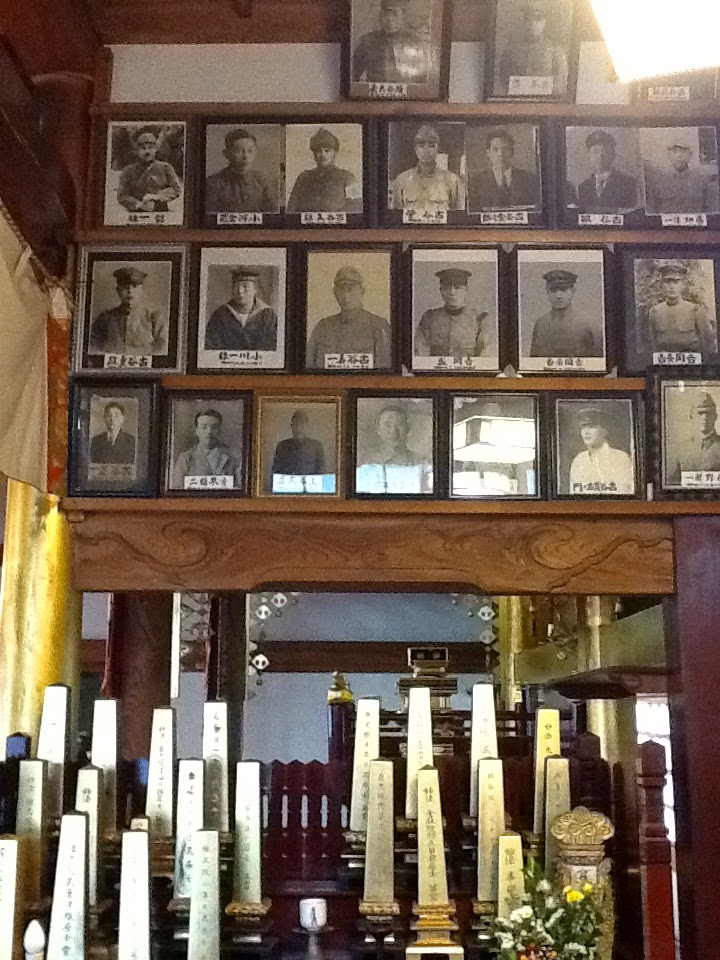 Small Temple Shrine to the War Dead of Obama, Japan

We also got to try an amazing local dish that is made by floating a certain type of mochi in ice cold well water.  A restaurant has been producing these awesome mochi from a time long before the United States was a concept on paper, using the same methods and same location.  No wonder they got it right! 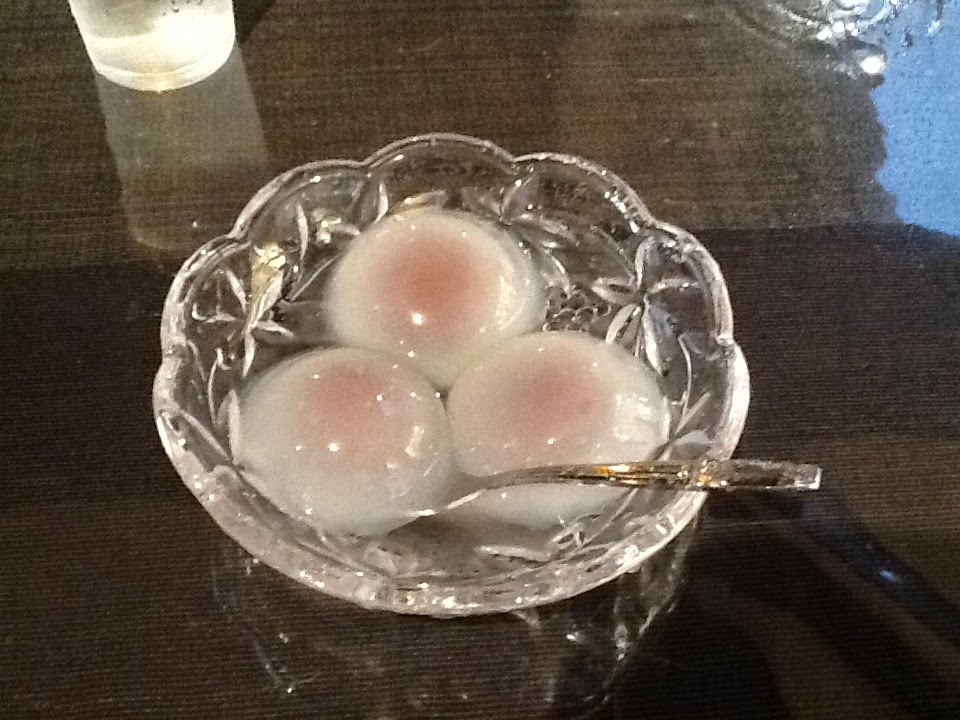 No, it is not real jellyfish, but it sure looks like it.  How cool is that?  It tasted amazing and they would scoop the amount you ordered out of a small pond of water located next to the counter.  Want three? Scoop net out three. Amazing!

Lastly, we got to check off a bucket-list item for Danielle in Obama.  She had never seen fireflies before this point.  In normal conversation we mentioned that to our host, he dropped everything and we went with his son, (who is studying to be a math teacher), to the secret firefly location.  I would include a map of this location, but as it is a secret, that would probably be bad.  You will have to just wonder.  I am sure it will keep you up all night.

We learned the secret firefly calling technique which involved emergency car blinkers being left on for a few minutes.  The strike-through is so it can remain a secret.  Pretty sure that releases me from liability in writing about it.  Soon after the secret method was employed, little fireflies started piling on to all of us at the car.  Quite an amazing end to our Obama adventure. 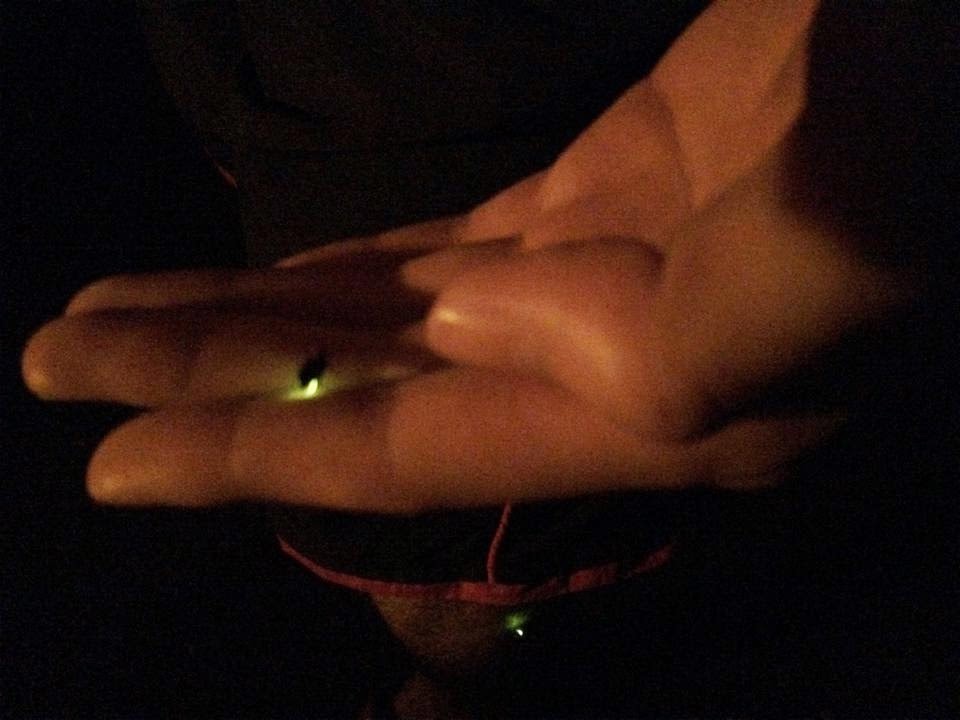 Located at hahahahaa, which is at the cross streets of hahahaha and hahahaha

Sorry Fumio, I just could not keep such an amazing secret.