Picture an entire neighborhood in your head, now, fill it with a curving cobble-stone floor that arcs out from some unseen central point.  Add curving rows of stalls that spiral around a center that at times is so far away that the curve appears to be a straight line.  Mix in the smells of fish, briny water, and diesel fuel.  If you take whatever you just conjured up in your mind and multiply it by about ten, you can come close to what the Tsukiji Fish Market is actually like.

According to my extensive five-minute research on the Tsukiji Fish Market on Wikipedia, it is not only the biggest fish market in the world, but also one of the biggest whole-sale markets of any type, anywhere.  Let that sink in for just a second.  Damn, that is big!

If it swims in the ocean, legal to pull to land, and somewhat safe to eat, it is at Tsukiji.  We decided to wander the busiest market on the globe, to take pictures, get in the way, and try to understand just how unfathomably big that sucker is, and we were blown away. 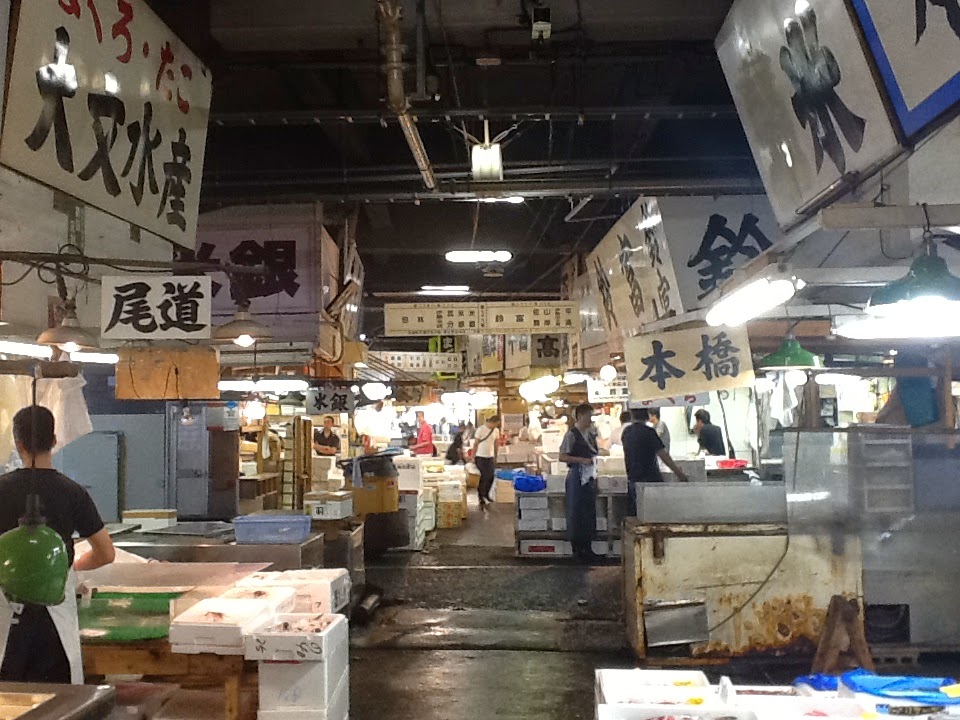 The market is so big that you need actual scooters to transfer product and people around the arc.  We went during the off-hours, which is closer to lunch time, and of course wandered into places that we were not supposed to visit or see.  We went in right through a loading dock, past signs that probably said something about wearing closed toed shoes and no tourists allowed.  Took pictures near signs that expressly stated  that the market was for selling fish, tourists needed to stay out of the way, and avoid pictures because they slowed down the speed at which the fish was sold to actual customers (non-rubberneckers). 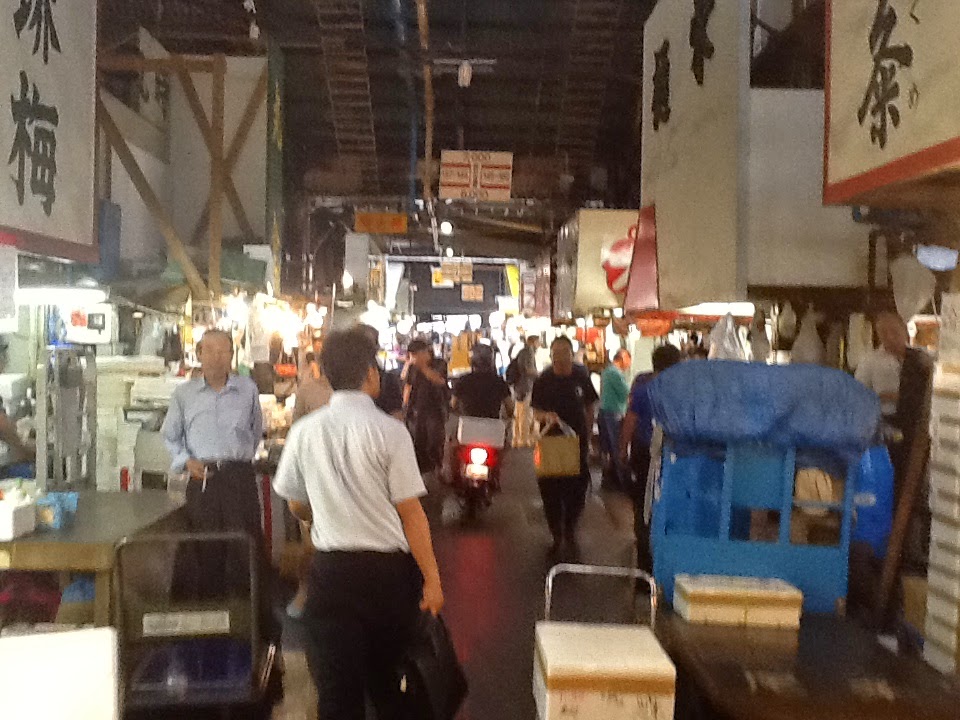 It was huge, the sounds were almost overwhelming.  I am not sure if I can even imagine the speed and drama that must unfold as the market opens at some un-Godly hour when humans are meant to be getting their R.E.M. sleep.  The floor was constantly wet, saws in motion cutting chunks of fish that must have been taken directly from Moby Dick.  The amazing speed in which a salesperson could pull a still-live eel out of a tank, nail it to a board, and render it ready for a plate was like that of a NASCAR pit crew.  You know, if a pit crew prepared sushi. 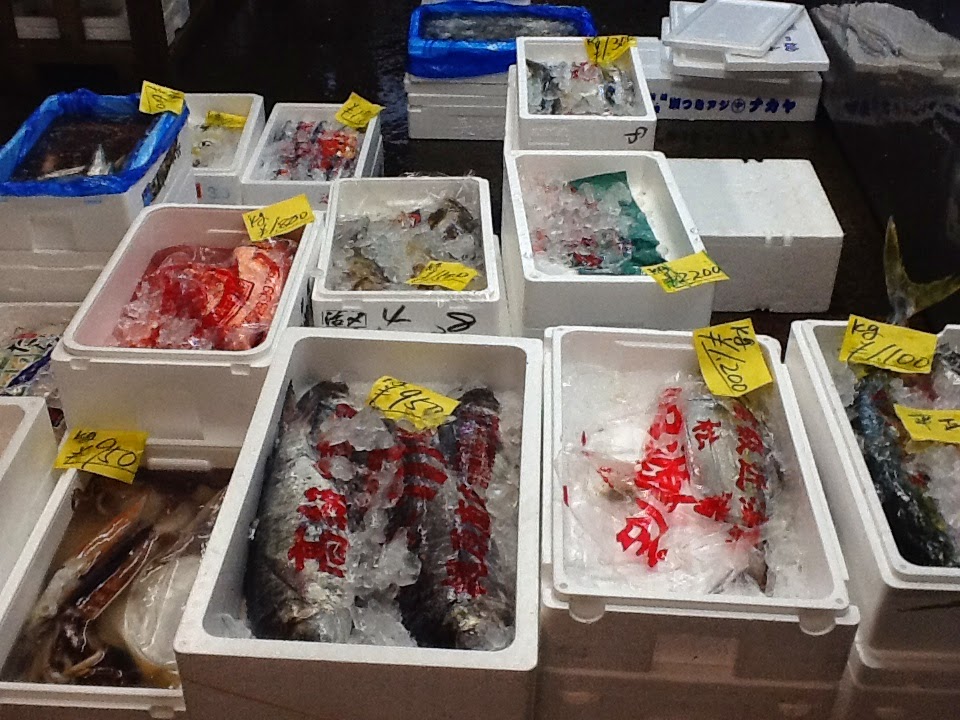 Stopping to take pictures often put you in mortal danger.  You were constantly trying to take a picture, dodge a person shopping, jump out of the way of a speeding motorcycle, while trying to not piss off the shopkeeper who had a knife that seemed to be reminiscent of the Buster Sword from Final Fantasy. 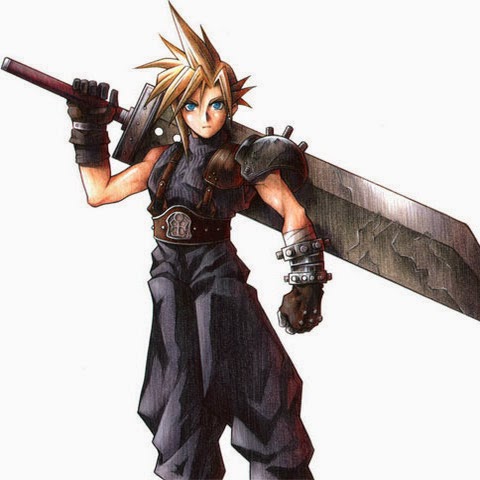 If you are ever able to wake up at some inhumane hour, the market allows about 120 people to watch the auctions for some of the biggest and rarest fish ever pulled out of the oceans.  You would have to be some form of bat-shit crazy to want to be there for it at that hour, but if that is your thing, enjoy! 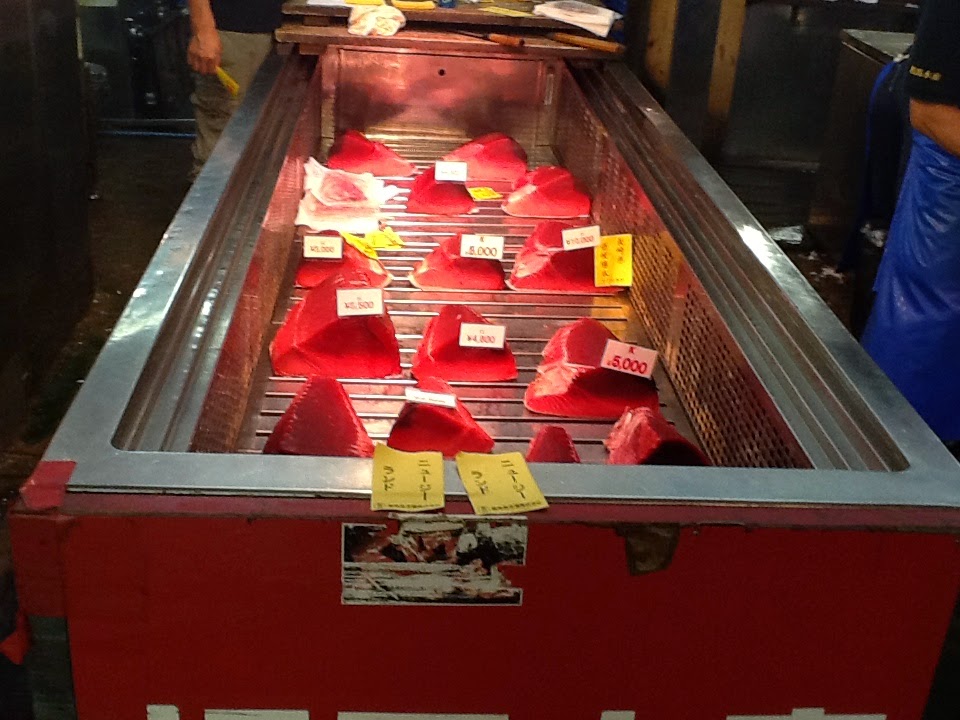