An Eye Patch at an Owl Cafe

After arriving in Fukuoka, we set out to meet up with some friends who lived in the area.  They are both involved in couchsurfing and had hosted us for about two nights at the start of our trip.  Unbeknownst to my wife, we had planned a bit of a surprise.  As I am sure everyone who is reading this knows, Danielle loves animals.  I have mentioned before that she thinks that any zoo should be a petting zoo, and that animals that might eat her during the petting process should just be bopped on the nose, then continue to be petted.  Needless to say, I have had to remind her more than once that not all animals enjoy being snuggled.  I am fighting a losing war. 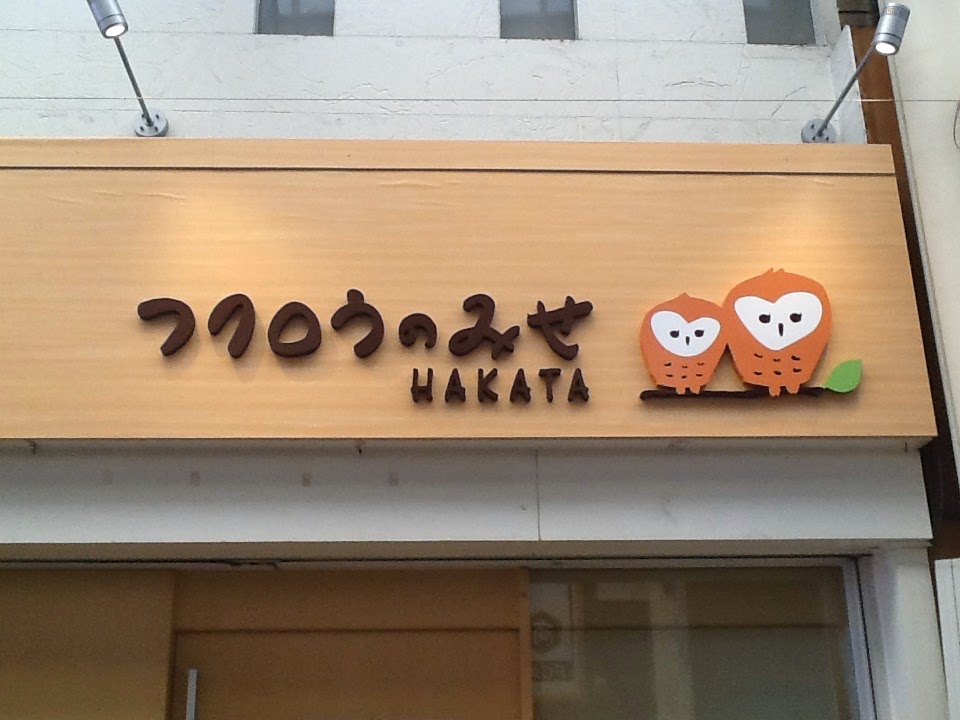 No Eye Patch, Yet

We wandered a bit around Fukuoka to kill some time, all the while with me somehow keeping the secret of where we were going.  Around lunchtime we met up with our friends and enjoyed some pizza.  Now, if you have never had the opportunity to enjoy Japanese pizza, it is an experience like none other.  Whatever combination of toppings you can imagine have already been tried and tested on the Japanese pizza consuming public.  Daikon and onion? Yes.  Pickles and pepperoni?  Hell yes!  We tried it all.  No slice was too funky to be ingested.  Oddly enough, there was no combination that was what I would consider to be disgusting, however a few were just a bit too off for my American tastes.  I do remember loving the Daikon. 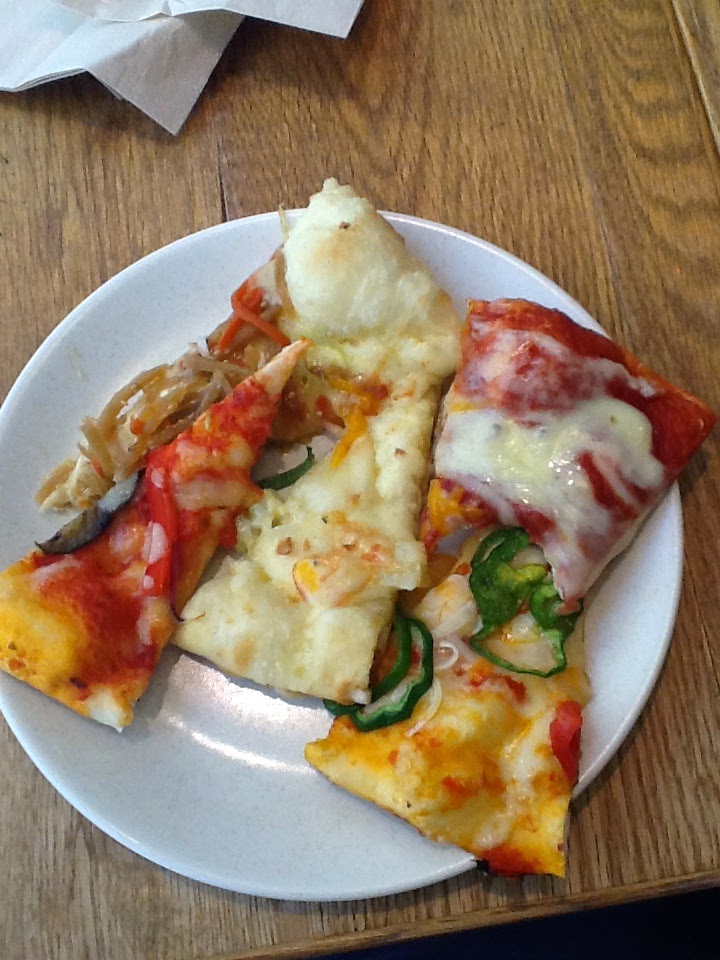 One of the other wonderful aspects of being in Japan is the shop-girls yelling at you all the time.  It is not-so-much that you are in trouble, but that they are getting people to come into the store.  Our friend who we were with had absolutely no shame, and decided to do his best impersonation of the shop-girl, much to her chagrin.

Off we went, through temples and alleys, past shrines, and a very tall and awkwardly thin building holding what I am going to guess is a mikoshi. 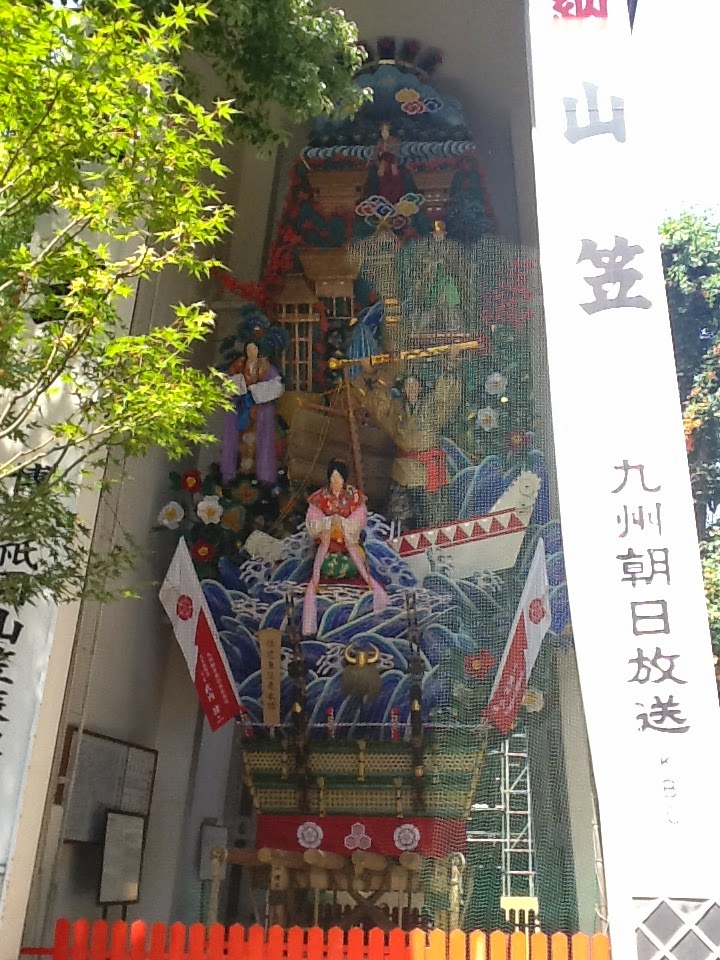 Geocache to the Left

After a bit of wandering around what looks to be a some sort of covered open-air mall, we arrived at an unassuming door.  It slid open, much like a small aircraft hanger door, and a woman who appeared to be in her mid-thirties walked out and started to go through some sort of safety lecture in Japanese.  We were in the back and I was barely paying attention due to my huge lack of Japanese language ability.. and then I saw her through a break in the small group.

She had a huge eye patch over one eye.

I lost it.  I had to turn around and hold in a bellowing laugh that I can only hope I was able to muffle down to some sort of snort.  Here we were at a cafe that specialized in letting patrons hold birds of prey, and the woman giving the safety talk seemed to be missing an eye.  This was epic!

After buying a very overpriced cup of coffee, they proceeded to let us hold owls.  For those of you who are members of P.E.T.A. and other organizations, you have to remember we were given a safety talk.  See?  Liability covered and happy owls? 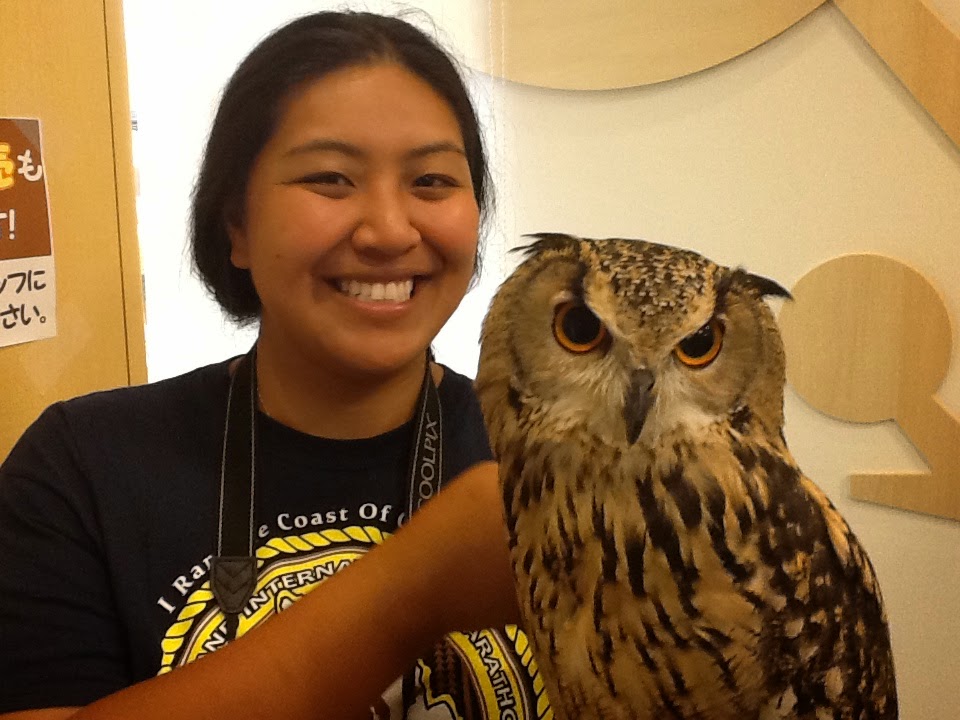 It was my turn to hold an owl.  The lady walks over with an owl perched on her leather glove, talons digging into something that is obviously more dense than my skin, and asks me if I would like to put the owl on my head for a picture.  When someone asks if you want to take a picture with an owl on your head, you should always say yes!

Also, I have been known to be quite dense. 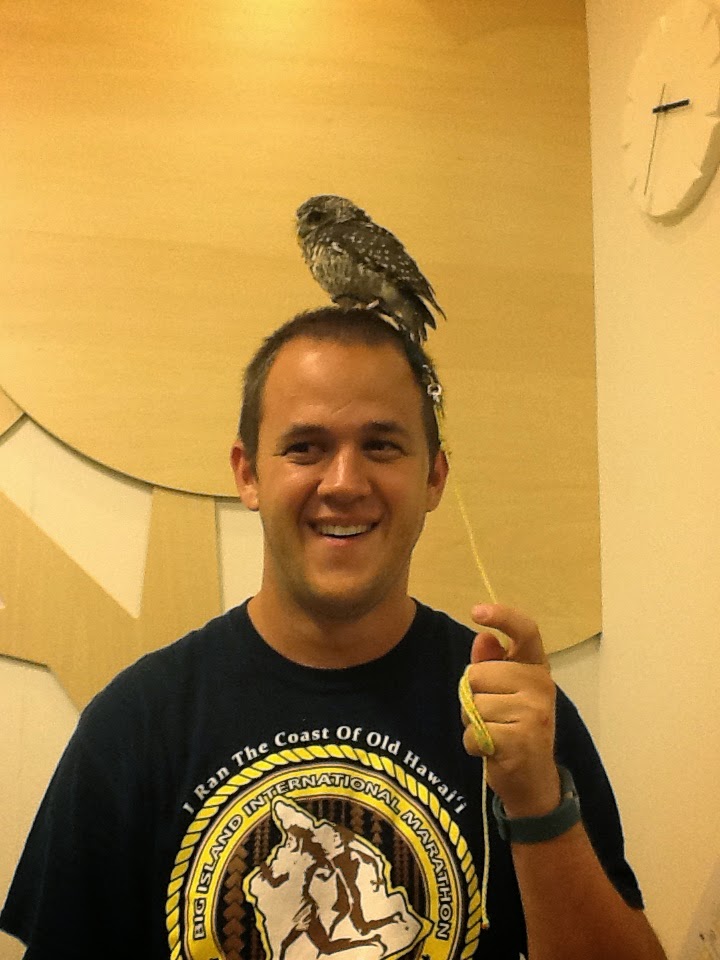 Match Made in Heaven!

We held owls, we played with owls, we frolicked, and we took videos, (which we were not supposed to do at all - shame on us!).  I also made a new friend.  With his internet debut, here is my friend - Mr. Creepy-Face Owl.  Pretty sure that is what his scientific name would be... feel free to correct me in a comment.

If there is a moral to the story, it is this - if ever anyone asks you if you would like to put a predatory animal near your eyes or other soft-tissue, you should always respond immediately with a resounding yes!